Rated: 3.5 / 5 (either version, though we all know the Japanese Gojira version is superior)

So I grew up with the English VHS version of this film, which has the usual English dub that may or may not be hilarious to listen to.  It was several years ago I found out that the American version of Godzilla 1985 changed up the film a decent amount, similar to how the 50s Godzilla: King of the Monsters (and as far as I’m concerned that’s the only Godzilla film that deserves the title King of the Monsters, because the 2019 American film sucks all sorts of kaiju ass) movie with Raymond Burr (a film I also grew up on with a VHS) changed up the original Gojira film so much from the Japanese version.  In fact, both American versions of these movies added in Raymond Burr.  Have to admit, whether you love or hate the American versions, you gotta give them kudos for being consistent with his insertion over the years.  I’d like to see them import some Chinese or Japanese martial arts flick and have Chris Pratt inserted at various points, becoming the main character in the process, and see how many people that will piss off and entertain.

Having the Criterion Blu-Ray version of the Gojira film, which contains both versions of the movie, and having watched both versions so that it’s more fresh in my head compared to my 10 year old self, I can safely say that the Japanese version Gojira is better than the King of the Monsters version.  The American version is incredibly shallow by comparison, simplifying or altogether removing the deeper themes to be found within the movie.  Plus, when you think about it, Raymond Burr’s character was entirely inconsequential.  Didn’t impact the plot in any way, despite how they tied him in with the main characters, even going so far as to make him best friends with the lead scientist (’cause that’s believable).

Obviously there’s the whole warning of nuclear weapons because the Jap’s still had sore asses over getting nuked in WWII (and I don’t blame them, at all), so it had the whole message of responsibility for the weapons we create.  How they can be used for good (nuclear energy being very efficient) or for bad (bombing cities).  This theme wasn’t lost in the American release, but they did downplay certain aspects of it during the latter half of the film, making the scientist’s conundrum more one-sided and less thought-provoking, and that optimistic line at the end, “But now the world can wake up and live again!” (blow it out your ass Burr).  As opposed to the line, “But if we use such weapons again, perhaps there will be another Godzilla.”  Ending on a note that’s more of a dire warning for the future, and I’m not talking about warning about shitty sequels (even though that happened, more than once).

The film (Japanese version) has more of an emotional impact for the Japanese that Americans can’t ever hope to connect with.  Not just with the relation to the atomic bomb, but how the fires caused in Godzilla’s wake resemble these fires that raged in Japan after WWII but prior to the film’s release.  Regardless, the emotion can still be felt.  And it’s amplified more with scenes of people looking on in sadness and despair.  Something they attempted to replicate with Raymond Burr looking on and commenting on the carnage like a WWF ring commentator, which has the sort of result you would expect.  Plus there’s the whole bit with an added sound effect of a guy screaming when a car blows up.  I’m not sure if they were going for comedy, but it made me laugh.  That scream sound effect is entirely absent in the Japanese version (because it’s a more serious film, playing up the terror more than it does the love of destruction that became prevalent with just about every other Godzilla film ever made). 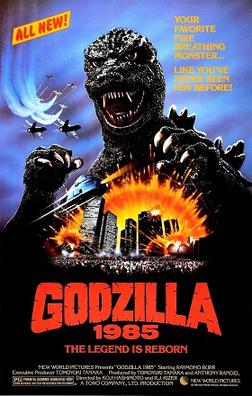 I can’t believe I’m saying this, but I actually like the English version better. To put it simply, it’s better paced and edited compared to the Japanese version. The main problem with the Japanese version is that it’s a little too slow paced, and the Godzilla footage isn’t as tightly edited as it should be, which the American cut somehow did better. Strangely enough, against all the odds, adding Raymond Burr improved this film too.  Sure, you have to see the Americanized 1956 film to appreciate it, but it works.

It’s still worth watching the Japanese version just to see some of the differences, especially with the Cold War stuff.  Unlike the previous film where version differences still had the same message overall, the American version of the 1985 film played things up to where the Russians were bad guys, plain and simple.  The Japanese version, they were played up as guys who caused near-disaster to happen due to an accident.  Honestly, seeing both versions, even though I’m not the biggest fan of unjustly villianizing a country, the American version had things played out in a more logical and believable fashion.  The way the Japanese version handled things, it was just awkward with how the Russians ended up causing the nuke to launch.

Like I said earlier, the American version managed to handle the editing and pacing better than the Japanese version did.  The Japanese version lingered on Godzilla too much, and had too much awkward silence in certain scenes, even when action was going on.  It made the film a little boring, and the ugliness of the Godzilla suit stuck out more (the suit wasn’t as good as I remembered from being a kid).  Thanks to the trimmed down and more tightly edited American version, these problems are either eliminated or considerably reduced.  Plus I thought the way the American version did the opening title sequence was cooler.

And you remember how strange (and unintentionally comedic) that scream was in the original film when Godzilla blew up the car?  Well, somehow, miraculously, the Godzilla scream they added during the finale when Godzilla falls into the volcano actually improved the drama and sadness of the moment.  Hell, even the epilogue by Raymond Burr at the end which followed the moment was surprisingly effective.  In fact, Burr insisted on the American version treating the film with sincerity, as opposed to the more comedic tone they planned on giving it.  Granted, they still had some cheesy one-liners by some military brass, but it didn’t dominate the film.

And last, but not least, Christ Almighty, what’s up with the ending music in the Japanese version? For one thing, it’s in English, and for another, it has a completely different mood from the rest of the film. Why not play some My Little Pony or Hello Kitty music while they’re at it?

THE TREATMENT OF THE JAPANESE AND AMERICAN VERSIONS ARE THE POLAR OPPOSITE OF THE ORIGINAL MOVIE!  This is unbelievable!  And this is one of those rare sole exceptions that proves American studios can do great things with the films they import.  That being said, the original Japanese version should be preserved as well.  That also being said, why the fuck hasn’t the American version gotten a proper DVD or Blu-Ray release yet?  They’re making me go to online websites to get a free version when I wouldn’t mind shelling out cash for it!

You won’t catch me saying this very often (only other time I would is with Cowboy Bebop), but the American cut is the way to go for this movie.

Highlights of the film:
* A strong return to the dark gritty roots. A reboot as effective as Tim Burton’s Batman.
* When Godzilla first comes onto the land, the fog atmosphere, the stomping, the tone of the music, and that growling noise he makes. Perfect, scary buildup to this monster.
* The music, mainly the opening credits and the Super X theme.
* The Super X.
* Finally seeing Godzilla getting the treatment he deserves, back to being dark, serious, and an antagonist.
* The fire breathing now looks awesome. This is the film that set the standard for what Godzilla’s fire breath should look like, as opposed to the mist he sprayed in previous films.
* The Japanese version has this unintentionally hilarious moment of overacting with this guy slamming his hand onto the desk (after lowering his head in despair) when the Japanese refuse the use of nuclear weapons against Godzilla.  Unfortunately absent in the American version.

Downsides:
* Japanese version moves too slow (pacing-wise).
* At times, the Godzilla suit doesn’t look that great. Don’t get me wrong, it’s a huge improvement over the 50s-70s movies, but it’s not as good as it will be in later films. 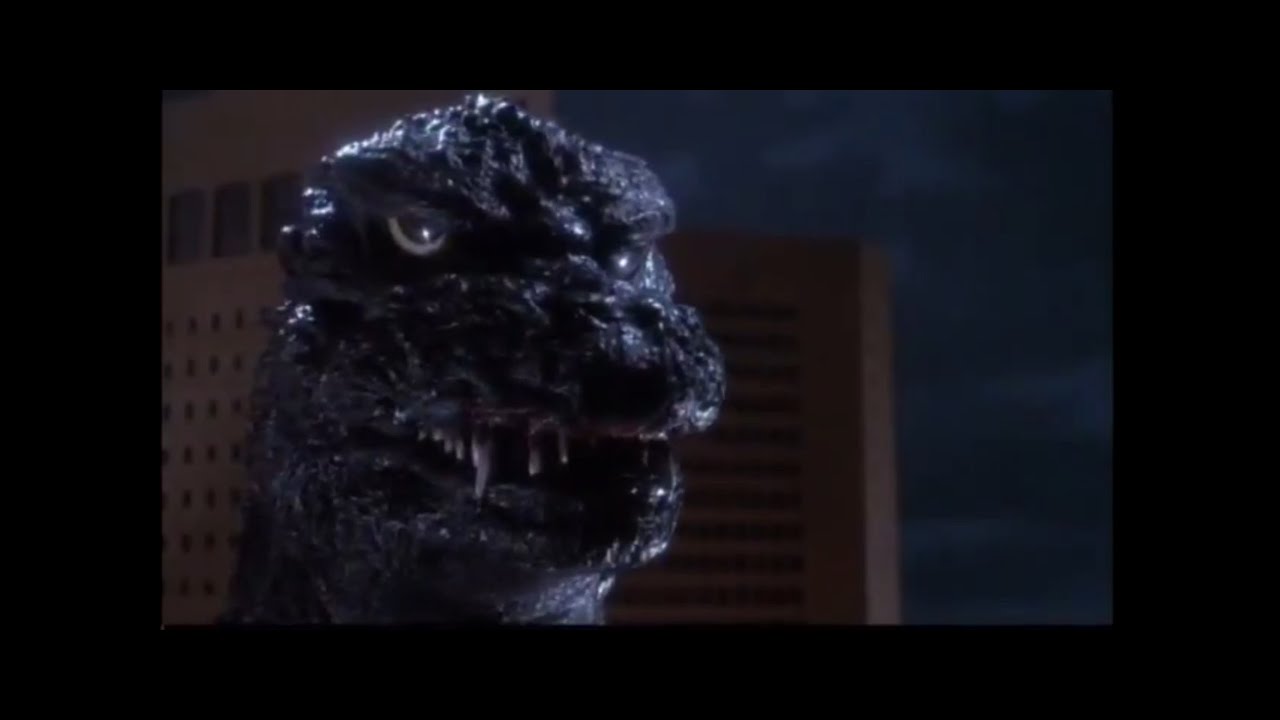 And I have to admit, both films are quite good in spite of there being no monsters for Godzilla to fight.  Just tanks and planes he can swat aside like flies, and some futuristic sci-fi laser trucks and lazer/missile flying machines (with superhero music; the Superman theme can kiss this theme’s ass).

PS: Oh yeah, that’s right.  And I remember a little Bambi Meets Godzilla short that played on the tape before the movie started.  Well, can’t pass up an opportunity to bash on Disney, especially since they’ll probably remake that movie in all-CG, bash on white male hunters, and probably pussify Bambi a bit while making his doe more of an ass-kicker who don’t need no saving from another bully deer.  Because we can’t having films encouraging boys to become men, they have to be encouraged to become girls.

PPS: There was supposedly a sequel to this Bambi Meets Godzilla short done in the 70s, where Bambi actually gets revenge on Godzilla.  Can’t seem to find that, but if I ever do, I’m throwing it in at the end of this review.