So I’m reasonably blasted right now.  Pretty sure I’d send my liver into a seizure if I drank anymore booze.

Oh, who am I kidding?  I could probably gulp down a few more shots and just be fucking dandy.  I just re-experienced a fucked up kid flick from my childhood.  Back in the early 90s when there were still physical video rental services that rented out VHS tapes (Christ do I miss those days).  That’s how I knew about the existence of this fucked up film whose sole purpose for existence seems to be fucking up the lives of children, and hoping half of them commit suicide after watching this movie.  Well, considering I almost offed myself in the 4th grade, I guess it almost succeeded, but not quite.  Nowadays, this is one of those movies that you can watch and laugh your ass off.  Because it’s depressing to the point of hilarity.  Like how Reefer Madness is so anti-pot to the point of hilarity.  This is the one and only: The Brave Frog.

The girlfriend frog’s name is Pookie.  I can’t take that name seriously, especially with fag boyfriend frog Jonathan saying that name.  Seriously, you think he has the hots for her at the beginning of the movie, but then he gets all ooglie eyed over another frog named Hercules (or Samson), wishing he would sodomize him with a pic-axe.

And the film begins with a bunch of baby frog tadpoles getting eaten alive by some water monster (I don’t know, maybe it was a salamander or something).  That lets you know what you’re in for for the rest of the film.  A bunch of depressing shit with shitty dubbing talking about how depressing it all is.  And if you want to have more fun with it, take a shot every time someone is crying.  Take 2 shots if it lasts longer than 1 minute, or if someone else starts crying with them.  I mean, for fuck’s sake, the opening title sequence has the main protagonist dropping a tear from his eye.  That’s accurate foreshadowing. 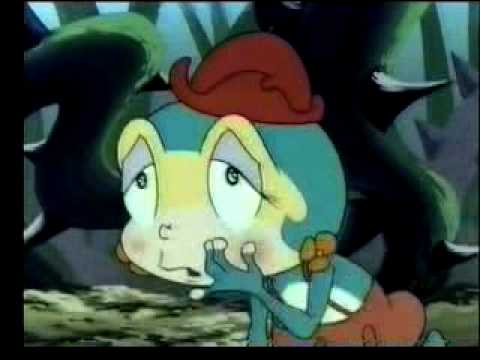 So aside from tadpole genocide, what else could happen that could make frogs so depressed?  Aside from getting bullied and some domestic violence with dads slapping the shit out of their son/daughter, they live in a place called Rainbow Pond.  I shit you not.  Which makes this ripe for a remake so we can see how fucked up the world would be under the rule of some overweight tranny-fag who is a dick to everyone by swinging their large bulging gay frog cock everywhere when they impose their will over someone.  When Alex Jones talked about how chemicals in the water turned the frikking frogs gay, he was talking about this pond in particular.  That explains why everything is so fucked up.

It also drives the lobsters insane, who like to beat the shit out of the elderly, especially snails.  Seriously, this line of dialogue is uttered while kicking a snail:

Now what line of dialogue could be more fucked up (and hilarious) than that?  Oh, believe me, there is one that’s a trump card to all of them.  These two little frogs are trying to save an egg after its turtle mother gets killed by the same lobster (yep, things die when they are killed), only for a snake to chase them and gobble up the egg.  After that happens, the frogs break down and cry for what must be the 15th time at that point in the movie, and the girl frog say”

This movie is fucked.  So fucked that it’s a marvel to behold.  I can’t believe rifftrax hasn’t gotten a hold of this thing yet, because if there’s any depressing as shit to the point of unintentional hilarity kid flick for them to riff on, there’s no better candidate than this.

Not to mention the whiplash transition with some of these scenes.  One moment these frogs are bawling their eyes out, next moment there’s a scene with frogs cheering and laughing as they’re riding some leaf down a water ride.  I must’ve snapped my neck in two places from that (once from the tonal whiplash, once from laughing so hard).

And the protagonist frog, Jonathan.  He’s an asshole.  How he mistreats his girlfriend (whose the daughter of the Godfather frog who runs this pond).  There may have been one or two moments when he has a little redemption, but there were times where I was just hoping this little prick would get swallowed by a salamander or something.  Or have his father bitch-slap him again.

Why the hell did I watch this the whole way through as a kid?  Well, I still remember the mindset I had back then.  Back then, I was thinking, “There’s gotta be a light at the end of this tunnel.  There’s gotta be a payoff to all the pain and suffering everyone is going through.”  And it ends in a manner similar to the movie adaptation of The Grapes of Wrath.  Where someone makes a speech at how things will work out in the end.  Back then, I was thinking, “Uh, ok, I guess?  Kinda want to see an epilogue of the boy and girl frog getting married and being happy to confirm all this.”  Today, all I can think is, “No, it’s not going to be ok.  You’re all going to die at the hands of some monster or asshole (or Asshole Monster).”

Although, to this film’s credit, I’d take this over The Grapes of Wrath anyday.  Because at least I can laugh over it.  Just how often characters break down and weep, how often whiplash transitions occur, the weird “the animators decided to snort some coke” moment near the end.  If any film proves that people can laugh at the misery of others, it’s this movie.  Believe it or not, I can recommend this film, strongly, with the advice that you treat it as a so-bad-it’s-good flick that you don’t watch while sober.

PPS: There is a sequel, which I haven’t seen yet.