Well, I said I would eventually track down and watch this little 1990 treasure in my Entertainment Industry Nostalgia: December 1990 post.  Time to deliver.  Done in honor of a French person who gave me a shoutout on this web page (which I had to use Google Translate to, well, translate): https://www.actualitte.com/article/monde-edition/le-dessin-de-lolicons-desormais-illegal-jusque-dans-le-cadre-prive/43547 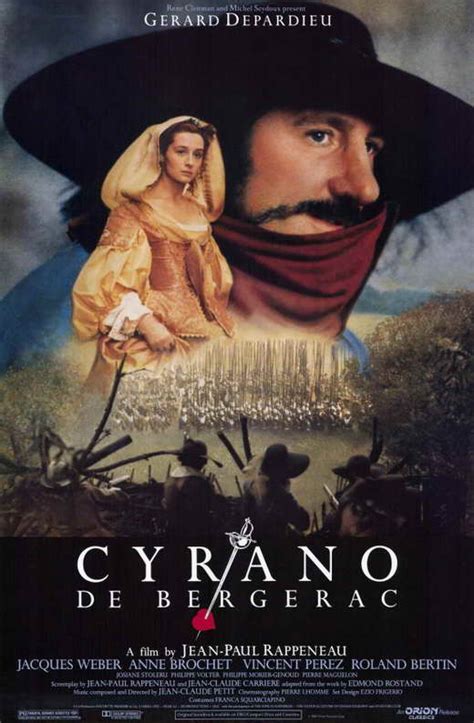 This is one of those classic tales that has been retold many times in many iterations.  About a man in love with a woman, who is too shy to confess his love directly to her, primarily because of a shame he has about a physical defect (though it is nothing he acts ashamed about in front of anyone else).  So he instead has someone else seek her love for him, in his place.  Someone who looks more appealing physically, but doesn’t have the personality or charming words or poetic linguistics to match (the very things the woman loves him for).  This charade goes on for so long, that it is destined to end in tragedy one way or another.  The question isn’t if tragedy will strike, or even when tragedy will strike, but what the consequences will be and whether or not they can recover from them. 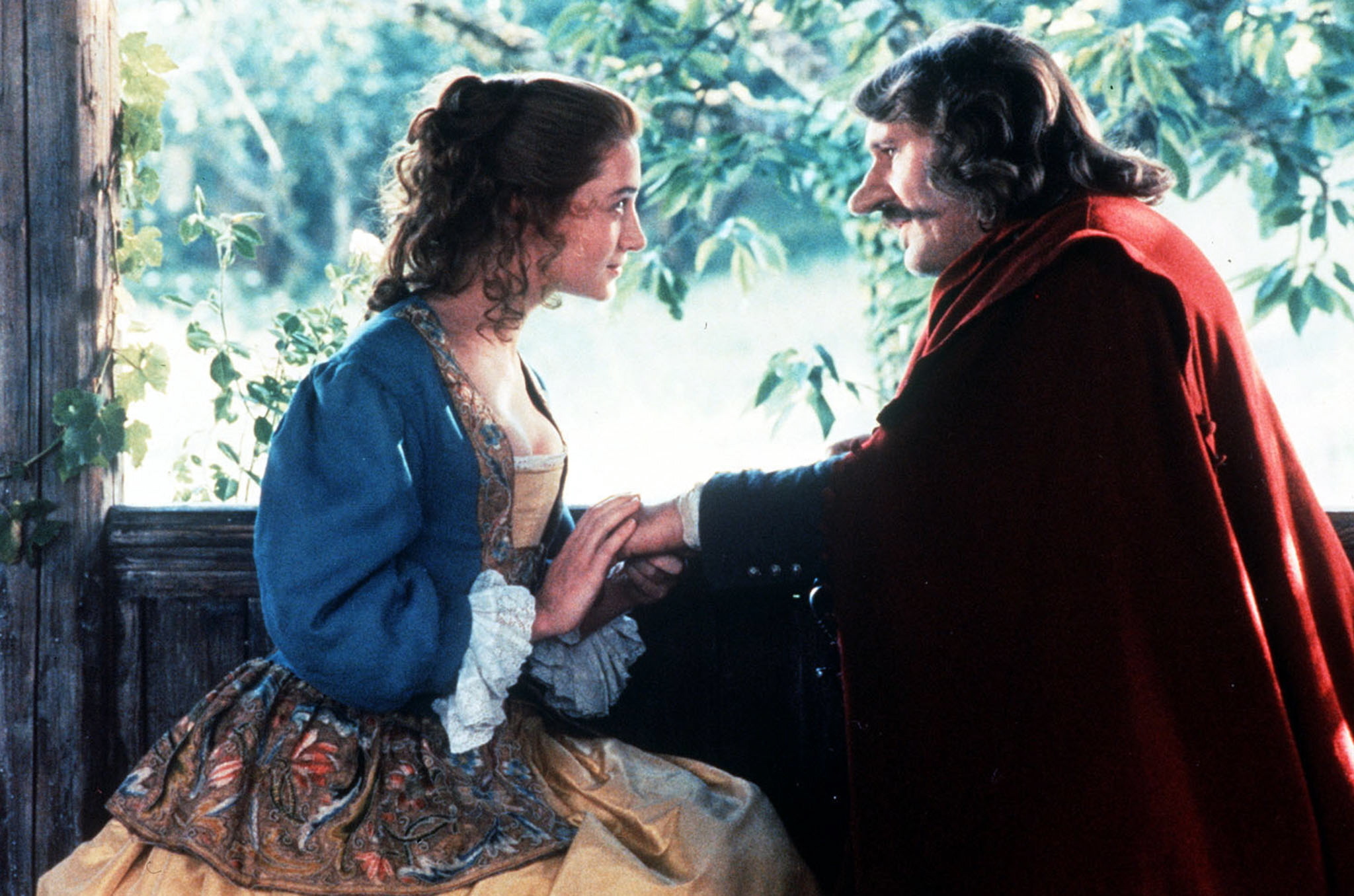 We’ve seen this re-adapted numerous times under numerous titles, in various shitty romance flicks.  Aside from the obvious comedic remake Roxanne (1987), ones that come to mind are Must Love Dogs (2005), and The Ugly Truth (2009).  And yes, I’ve seen both of those fucking rom-coms.  Must Love Dogs may not be all that bad; but after seeing this movie, it makes me despise it even more.  I mean, I know it’s not exactly a film with balls (even for a chick flick), but even when I was younger I knew it was really pulling its punches with the ending.  That guy should’ve left that bland-faced broad in the pet shop her and all her other pussies belong in.  That aside, when it comes to Roxanne, the only Roxanne romance I wanna see is the one with her and Max in A Goofy Movie.  The Steve Martin film, it’s just ok (never was a big fan of his, except for Dead Men Don’t Wear Plaid).

For anyone who has seen the American 1950 adaptation, it won’t take long to realize that this French version is superior to in in virtually every way.  The actors, the way they convey the dialogue and their mannerisms, how much story is told, the color scheme (that’s cheating, since the 1950 version is in black & white; but life isn’t fair).  Not to say the 1950 film isn’t bad, it’s just typical by comparison.  Plus I just can’t get over the fact that the guy playing Cyrano is a Turk who just wants to have buttsex with Lawrence of Arabia.

Anyway, some say that Roxanne was the best definitive update of the story, for those who aren’t interested in revisiting classic 1950s black and white films.  To them I say, “Learn how to fucking read!”  And I don’t mean that in terms of reading a book (which they should do anyway).  I mean in terms of reading subtitles in a foreign film.  A French foreign film in particular.  Because this film is worth it.

The film goes far with its poetry in style with the dialogue and whatnot.  Since this is subtitled, there’s no way us non-French Americans can truly appreciate it with how it is spoken, no more than the French can truly appreciate Shakespeare (especially Twelfth Night) without learning English.  Or how anyone who doesn’t speak Polish can truly appreciate Potop (a film I intend to eventually get to).  That being said, with the subtitles I got with this difficult to get a hold of for a decent price DVD that is out of print, it translates well enough to keep me enthralled.  I was enjoying each minute of this film, though the “I came from the Moon” speech did take me out of it momentarily.  And even the ending itself has balls that Hollywood refuses to grow with anything resembling an adaptation of this tale.

When it comes to Cyrano’s character, I was interested in how it would portray his flaws, beyond the obvious, “They view me as inferior to the average in terms of physical appearance” character flaw.  In other words, that of self-doubt, of shame.  I was pleasantly surprised to see that something was done with that by the end, which tied his character together.  How he viewed himself as an entertainer who must sacrifice his own wants and desires for the sake of fulfilling the wants and desires of others.  A trait commonly found among entertainers.  And by the time the epilogue came around, it proved to be a trait he wished to make his bed and lie in.  A combination of honoring the memory of the man whose looks he envied.  Blending the fiction of a created play with the desires of reality.  It’s an interesting take on this sort of character flaw.  The take that makes the best use of a character flaw, because it interprets it in a way that one could almost say it’s not a character flaw with how Cyrano goes on about it at the end of the film.  But this doesn’t take away from the tragic element.  It makes one consider how they should be remembered in death, and if certain personal wants (or possibly needs) are worth sacrificing for the sake of the lives of others.  If the moment of joy outweigh the moments of regret.

Tragedy aside, this film has moments of comedy I rather enjoyed and found myself giggling at like a schoolgirl (of which can’t be legally be portrayed in a fictionalized fantastical cartoonishly drawn hentai fashion in France anymore, even if just in the realm of your own home with no intention of putting it out publicly or online, because the French have their own flaws of surrendering that extend beyond government and country at this point apparently; Je me rends!).  And the battle during the finale, acting as a metaphor for the conflict within the protagonist’s soul, has enough flare and spectacle to be a feast for the eyes (albeit not in the same vane as films like Akira Kurosawa’s Ran, or Braveheart, or Lawrence of Arabia, or Braveheart, or Apocalypse Now).  Enough of the other good stuff to allow me to sit through until the very end.  Like how the romantic love interest faints because of how much she is in ecstasy over the powerful romance of the words Cyrano sends her.  And it all seemed fitting, as opposed to some films that end shittily just for the sake of ending shittily and pissing viewers off (like a good portion of Japanese anime movies and series).

Certainly one of, if not the, best foreign films to be released in America in 1990, worthy of winning its best Foreign Film award (back when those Academy Awards sort of meant something, though I question their validity ever since Around the World in 80 Days beat The Ten Commandments in 1957, fuck everyone who decided that was the objectively better film).  Let alone being one of the best films of 1990.  If you can track this down, I recommend watching it, especially if needing to choose between this and the 1950 American adaptation.  You can say what you will about American vs. French films, but in this case the French got one over on us.

On a more historical note, one of the things I thought of when watching this film was, “I wonder if people like Black Pilled would find a reason to bitch about this story the same way they bitched about Rudolph the Red-Nosed Reindeer because the “nose” was a metaphor for Jews, thus the story was about the persecution and eventual acceptance of Jews.” Closest I could find on those grounds, in terms of when the play this film is based on (very late 1800s) was in regards to the Dreyfus Affair. About how a French Jew in December 1894 was convicted of treason, had a few retrials, and was eventually found non-guilty of these charges, even though it contributed considerably to his personal suffering over the years. It also caused France to split into factions of pro-Dreyfus and anti-Dreyfus. Whether he was guilty or not of treason, I don’t know, as I haven’t done enough research into the subject. Just something to reference in terms of historical coincidences should someone try to make that comparison. Honestly, I don’t see the relation, at least not on the surface. But I’m sure someone out their could spin a convincing narrative to show how both are intertwined with one another.

PS: I really need to get around to reading (and then watching film adaptations of) Don Quixote.  Well, maybe after I’m done with Tom Sawyer.

PPS: Off the top of my head, the other great French films I’ve seen are Le Samurai (1967), Amelie (2001), The Wages of Fear (1953; if you can get past the boring as fuck first hour; Sorcerer was better!), Delicatessen (1991), and The Triplets of Belleville (2003).  Regardless of how you feel about your home country, and how much you may make fun of the stereotypes of others, each other country usually has a few films that are noteworthy enough to stand up to, if not exceed, the quality of the best your own country has to offer.  Though in my personal opinion, regardless of the country you reside in, you’re better off only comparing films that were released prior to 2012 (roughly the year, give or take 6 years, that things started to go to hell in a general sense in the film industry).