The movie begins 1000 days after the events of the previous film (if you don’t count the “future” scene). A UFO appears, and Miki (the psychic from the previous film who helped stop Godzilla at one point) helps analyze it by bringing up satellite images to top officials. I know she works for the government and all, but I don’t remember her having this position in the previous film.  Last I checked she just helped run a school for gifted psychic kids who might turn into the X-Men one day (might explain Final Wars). Interesting sort of promotion she’s gotten.  You’d think government officials would want to exploit her psychic powers even further, like trying to read the minds of the aliens or something?  I mean, last I checked, that’s what psychics are primarily good for.

So after destroying 2 helicopters, the people from the UFO (who are from the future) say they come in peace and want to help Japan. Figure that logic out.

So their plan is to go back to the past, and teleport Godzilla away from the island so that he won’t evolve into the monster they would eventually come to know him as. And then leave the 3 Dorats behind to become Ghidorah. Those Dorats, by the way, are adorable. But when I saw what they did with them, leave them behind on the island, left to their fate of being near the H-Bomb when it goes off, I got sad and pissed off, knowing that they would suffer and turn into Ghidorah.

If their plan was to get rid of Godzilla and replace him with Ghidorah, and mind control him, why even make themselves known in the first place? Also, if they wanted to bring 3 people with them, why did they bring Miki the psychic, who could’ve read their minds and found out what their real plan was?

The American’s are great in this movie. By great, I mean so bad they’re good. Their acting is atrocious to the point of hilarity.  Best line, “Take that you dinosaur!”

Now here’s the big problem with time travel movies in general. Plot holes are almost always guaranteed to come up. Since King Ghidorah took Godzilla’s place, where was he at in the past? Wouldn’t he have been fucking up Japan instead during the 50s and onwards? Could Japan have become a wasteland because of him if he couldn’t be stopped back then? Well, I guess it could be argued that it took a long time for Ghidorah to evolve and grow up to the point where it would become a threat. How would anyone from the present be the same and remember the people who went on the mission? And isn’t the Godzilla from the 50s supposed to be different from the one in the 80s and 90s? Weren’t there 2 Godzilla’s? What about the other one? Why the hell were 3 Japanese from the present sent to the past to witness this change happen? Gaaaaaaahhhhh!

Oh my God, just when I thought there wasn’t any other quote in the movie that could top “Take that you dinosaur!”, this one comes along: “You’re saying they were exposed to the Bikini H-Bomb test?” The Bikini H-Bomb. That’s gotta become the name of an alcoholic beverage or something.  But to be fair, this was based on a real thing, and was something unused (to a more explicit degree) in the 2014 Gareth Edwards Godzilla movie.

So Ghidorah was created to destroy parts of Japan so that Japan can grow in a way the people of the future want it to be built. And then one of their team members, the Japanese team member (of course) has a problem with this. Why the fuck did they even bring her along? Probably for the same reason they brought 3 other people to the past with them. So that their plans can get FUBAR’d by their dumbassery.

And the worst part about their logic, after they recapture the future Japanese woman team member, after she tries to help the people find a way to beat Ghidorah, they don’t consider locking her up. So she reprograms the android to work agaisnst them. You know, I don’t care anymore, let’s see a fucking monster fight already, that’s the only thing that can redeem this movie at this point.

So as it turns out, Godzilla was teleported to an area that would eventually become exposed to nuclear radiation, thus causing him to evolve into the same monster anyway. Not that this wasn’t already obvious, but I guess the people from the future didn’t think their plan through all that well.

Ok, the first initial fight. It’s not exactly fair, considering for the 1st half, the future people controlled Ghidorah, then lost control. But long story short, the 70s movies made a better fight scene out for this than this movie did. That’s not to say the fight is weak, but if you wanted a Godzilla movie that had the best fight against King Ghidorah, go with one of the 70s Godzilla movies (vs Ghidorah or vs. Monster Zero), or go with Final Wars.

After Godzilla blows off one of the Ghidorah heads and pretty much destroys its wings, the Japanese future woman (I can’t remember her name) goes to the future to rebuild Ghidorah, and it comes back as a cyborg monster against Godzilla. So the 2nd fight begins. It’s at this point that I realize that Cyborg Ghidorah is a substitute for the Super X weapons, since it’s being piloted by a person, and has the same video game joystick control used to launch missiles, cannons, and lasers at Godzilla (in this case, just lasers). Is it better than the previous encounter? Sort of. But I was too annoyed at it to be entertained. Godzilla blasted the thing’s wings apart again, yet it still managed to fly. Not to mention the other places it did its beam blast. Yet Emmie (that’s her name) still managed to hook Godzilla, fly him over the ocean, get blasted by him again and fall into the ocean with him, and manages to safely escape and teleport to the future. 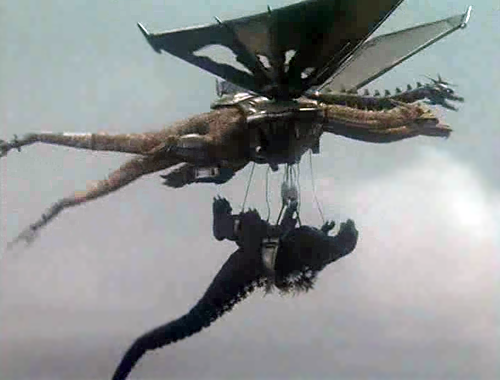 This movie is overrated. I see a lot of people give it positive reviews, but I don’t see very many bitching about the plot holes and inconsistencies. Not to mention that people from the future are a bunch of dumb fucking idiots (which I guess is an accurate prediction when you think about it). And it ends just like Biollante did. Godzilla survives and is still ready to go off and destroy Japan, except he’s more pissed off about it this time around. Well, we’ll see in the sequel.

At least the movie brought some good music, which seems to be a trend with this Heisei series. Great music, everything else is hit or miss.