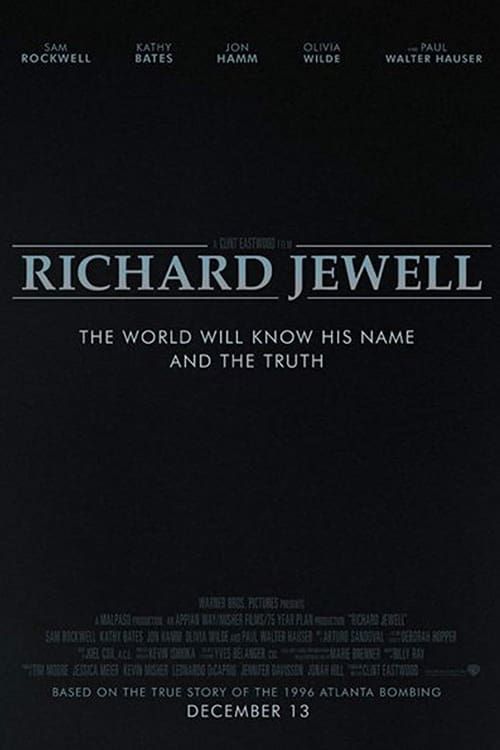 “Jewell fits the profile of the lone bomber.  A frustrated white man who was a police wannabe who seeks to become a hero.” 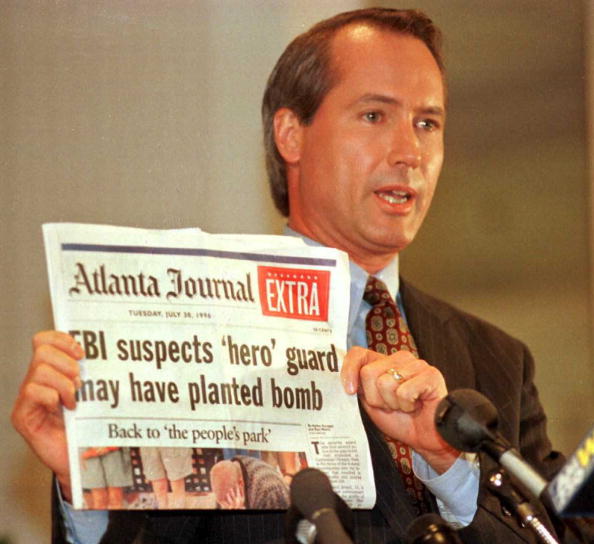 If Steven Spielberg’s 2018 film The Post is a message about the importance of the press and how they should never be suppressed from reporting the truth, then Clint Eastwood’s 2019 film Richard Jewel a response to that film giving a big “fuck you” to the press for when they misrepresent the truth.  Of course, it’s also a big “fuck you” to the FBI as well, so the government still gets its fair share of bashing either way.

And as you would expect, the media isn’t happy about this, so they bashed the film for it’s portrayal of the reporter who initially broke the story on Jewell being a suspect.  Olivia Wilde portraying Kathy Scruggs.  Basically insulted at the idea that she would offer to have sex with someone in exchange for information for a story.  Except that’s not exactly how it happened.  Olivia tweeted about how she saw it, and honestly, it does seem to fit more her side of things than it does Eli Glasner’s.  Plus he bashes on the film for portraying her negatively as the person who ruined Richard Jewell’s life.  Problem is, that’s exactly what the fuck happened in reality.  Goddamn reporters and these hack film critics.

To sum up what it’s about, it’s about a security guard, trying to work his way up to being a police officer, but fails at his previous attempts, and is currently in a lowly security position as opposed to a law enforcement position.  Then one day, during the 1996 Olympics in Atlanta, Jewell finds an abandoned backpack, brings security’s attention to it, they find out it’s full of explosives, and get as many people out of the way as they can before it goes off.  For the first few days, Jewell is pronounced a hero.  But soon after, he is pronounced a villain, as he is the most likely suspect responsible for the bombing as determined by the FBI.  Soon some people whom he thought were friends turn on him, the media continually carries on the story that he is the most likely suspect responsible for the bombing, and he is harassed by the FBI continuously.  And he once held them as the top tier form of law enforcement everyone strives to achieve, because they are the ultimate good guys enforcing the laws and protecting the nation’s security.

The message of the film is quite clear.  If nothing else, Eastwood is about as subtle with a film’s message as Spielberg is.  Relevant themes regarding the demonizing of white males who also just so happen to be gun owners.  How the media portrays them as the most dangerous, when they really have good intentions.  How they are portrayed as having egos and desire for power in order to oppress others, when they just want to protect everyone and do the right thing.

Now, of course, there have been examples of white guys being victims to the whole, “presumed guilty before being proved innocent” shtick that’s been going on for a while, even before this film’s screenplay was being written.  The victims of the #MeToo movement (which makes it tempting to be part of that whole MGTOW movement that people like Turd Flinging Monkey [TFM] are a part of).  Those who identify as white nationalists as extremists (which the ADL has now defined as a hate group).  Hell, even this whole aura of villianizing right-wingers in general.  And those in the mainstream media reviewing this film don’t seem to get the hint.

Nonetheless, the specter of domestic right-wing terrorism haunts the movie, an unseen and unnamed evil tearing at the bright fabric of American optimism.

Even some commenters on that NYTimes article laugh at the fact that, despite some good point it makes regarding the film’s statement on “a regular guy’s idiosyncrasies can seem like either warning signs or virtues, depending on who’s looking,” it just seems to be intentionally blind to the irony of its position.  To quote a few comments from that site:

“He was bullied.” The reviewer mentions the FBI as one of the guilty parties but manages to almost completely gloss over the fact that it was the main stream media that crucified Jewell, getting the story wrong and eventually having to pay a hefty settlement. Another disgusting episode in the history of “journalism”.

The reviewer obviously wrote this off the cuff (not even knowing the source material?), so it does not surprise me that he does not give more than a passing mention to the sorry role of the various media in the public indictment of Mr. Jewell. He does find the space to provide a defense for Ms. Scruggs, a woman with demons and a dubious history with law enforcement. Whenever the media comes to its own defense, it always comes across as so self-serving and blind.

i don’t believe mr. eastwood is blind to the complications of sexism, but i am also sure that he hasn’t hesitated, as an actor or director, to use stereotypes to make a point. most people will realize immediately that trading sex for information is not far from trading sex for money, and that yielding information for flirtation makes you a cheap john. as far as the client goes, even the recent horowitz report concluded the obvious: the standards need to be higher. and given that the media pretty much walked their ethics on the street in order to climb all over this story, i can’t see the scruggs character as anything but emblematic and her behavior as ethical depravity in the bluntest terms. i admit sexist tropes are a convenient reach, but the fact that so many viewers have misread this one scene, and shut their eyes to the implications that are obviously intended, is their struggle.

Regardless of how amusing I find the defenses brought forth for the reporter who helped ruin Jewell’s life (and how ironic that all is), it is true that this film has its historical inaccuracies.  Mainly concerning the fact that neither Jewell nor his attorney (played by Sam Rockwell) interacted with the reporter Scruggs until years later during legal proceedings.  And it is more than likely that it stereotyped Wilde’s character a little too much (though she does express regret for what she had done later on in the movie, not making her completely two-dimensional).

This film is an interesting sort of study on the assumptions we make about people when we’re desperate for answers.

It’s a theme that never gets old because it keeps happening.

Bottom line, this is one of Eastwood’s best films.  Comparable to Sully where he also tackled the issue of heroism (whether addressing it in various ways, or deconstructing it) among everyday Americans.  In fact, aside from Unforgiven, that seems to be a theme he revisits off and on ever since American Sniper (also done in The 15:17 to Paris).  Makes me hope he’ll make a film that tackles that subject in another way before he kicks the bucket.  Something along the lines of admiring someone you consider a hero, or an inspiration, someone you’re a fan of, until you find out they did something so heinous that it overshadows everything else they’ve done in the past.  But should it overshadow all the other good things they’ve done?  Should that destroy everything else that once stood for something?  Or should all those things be forgotten and erased regardless of how they once inspired people in a positive light?  That would be a heavy-hitter if done right.

Well-shot, well-paced, very well acted by Paul Walter Hauser playing the titular character.  The music though, it’s typical meh stuff.  It does have some emotionally manipulative moments, particularly in this one scene where Cathy Bates’ character (playing Richard’s mother) gives this speech where she breaks down crying, but I can’t really complain about it too much considering that really happened.  Only way I could bitch about it is in the way it was shot (it was fine) and in the music played during the scene (which wasn’t done until near the end of the speech, and it was done in a typical manner).  Difficult for me to find things to complain about with this movie.  Especially when the film’s main focus is on how an everyday American citizen can become a victim of the media that proclaims to speak the unbiased truth, and of the federal law enforcement agencies sworn to protect them.

I submit to you that the justice department cannot be trusted to investigate itself, because that report is also a lie.  It is filled with false statements, half-truths, and gross distortions of the truth.