To get into the spirit of this Clint Eastwood directed film, it helps to be familiar with 3 previous films of his.  Unforgiven.  Flags of our Fathers.  American Sniper.  All of them have a central theme similar to the one in this film, the difference being this film is more optimistic in its final note compared to those other movies.  That theme is about heroes and legends, and their deconstruction.  Because most, if not all, of those films go within the humanity of those characters and showcases their faults, showing how those who are portrayed as icons are flawed human beings like everyone else.  All the central characters in those films, plus in Sully, reject the notion that they are heroes.  They only see it as doing their jobs, nothing more.

In the case of Sully, it begins by mentioning how he did something (landing the plane on the river) that could be considered brave and heroic, but also foolish and dangerous.  Points are brought up on how there were probably better decisions that could’ve been made which would’ve resulted in a better outcome for everyone.  This causes doubts to arise within Sully himself, making him wonder if he did make the right decision.  Making him wonder if he made the wrong choice.  And he becomes plagued with nightmares of what could’ve gone wrong.  Politely shrugs off people who call him a hero.  And only cares about doing his job well and making sure all passengers come out safe from each flight.

Because deconstructed the idea of a hero, myth, and legend, it’s a good thing as this film highlights.  You don’t need to put yourself on some high pedestal to make yourself above everyone else.  That’s not how it works.  Because that’s not how heroes are.  What makes a person a hero is taking an individual who has his/her own pros and cons, skills, weaknesses, and thrusting them into a situation where lives are on the line, and having them make one or more decisions within that scenario that generates a good outcome.  It can happen to anybody.  And because it can happen to anybody, it’s important to show that those who are considered to be heroes are just like anybody else.  They are human. 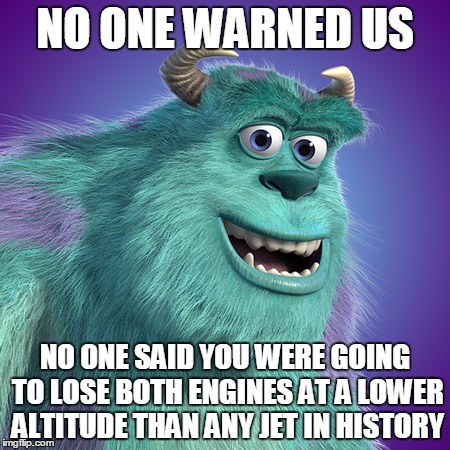 Unlike Eastwood’s other films, it ends on a more uplifting note, that despite one’s flaws and uncertainties, they can be intelligent enough to make the right call under pressure.  Because heroes are not computers.  They are human, and they can still adapt and do enough regardless of their flaws.

I thought the film was solid in that message, and didn’t mind the placement of the flashbacks because they highlight the themes that each scene is showcasing.  Showing the flight crash from the perspective of the flight controllers, from the passengers, and ultimately from the pilots, each time giving insight into each perspective.  Well acted, and has a better use of CG than in Eastwood’s last film American Sniper (still could’ve used some improvement on the water effects during the crash, but it’s passable).