So you remember a while back when I did a review for both Jumanji movies, and briefly mentioned that there was an animated show back in the 90s?  Well, I finally got around to purchasing a copy, and watched the whole thing.  It was mainly nostalgia that drove me to revisit it more than curiosity.  And how was it?  It was a bit of a struggle.

The animated style is a bit on the bizarre side.  Just about everything isn’t drawn symmetrically, there tends to be an exaggeration to just about every human, every creature, every object.  I got used to it after a while, but man is it a bit weird.  But hey, at least it makes it stand out, and I’ve seen much worse attempts at trying to be unique by being bizarre.

And you can pretty much forget about it being some sequel or prequel to the film it’s based on.  It is its own stand-alone thing, with characters borrowed from the movie.  The main characters and Judy and Peter, who live with their aunt alone in this new home/mansion (basically the same start as the film, minus the extended prologue with Alan Parish getting sucked into the board game).  They discover the Jumanji game it the attic, give it a roll, and get sucked into the game.  So unlike the movie, where creatures can appear in their world, with a very rare chance that they might get sucked into the game, the players just get sucked in each time they play.  So I guess it’s more like the remake in that regard, minus the bullshit Atari-like system/cartridge (on that note, regarding the remake, why the fuck wouldn’t it transform into a PS1 disc, considering the douchebag who got the game threw it on a stack of PS1 games?  Where’s the fucking [game] logic of transforming into something that sets itself back a few console generations?). 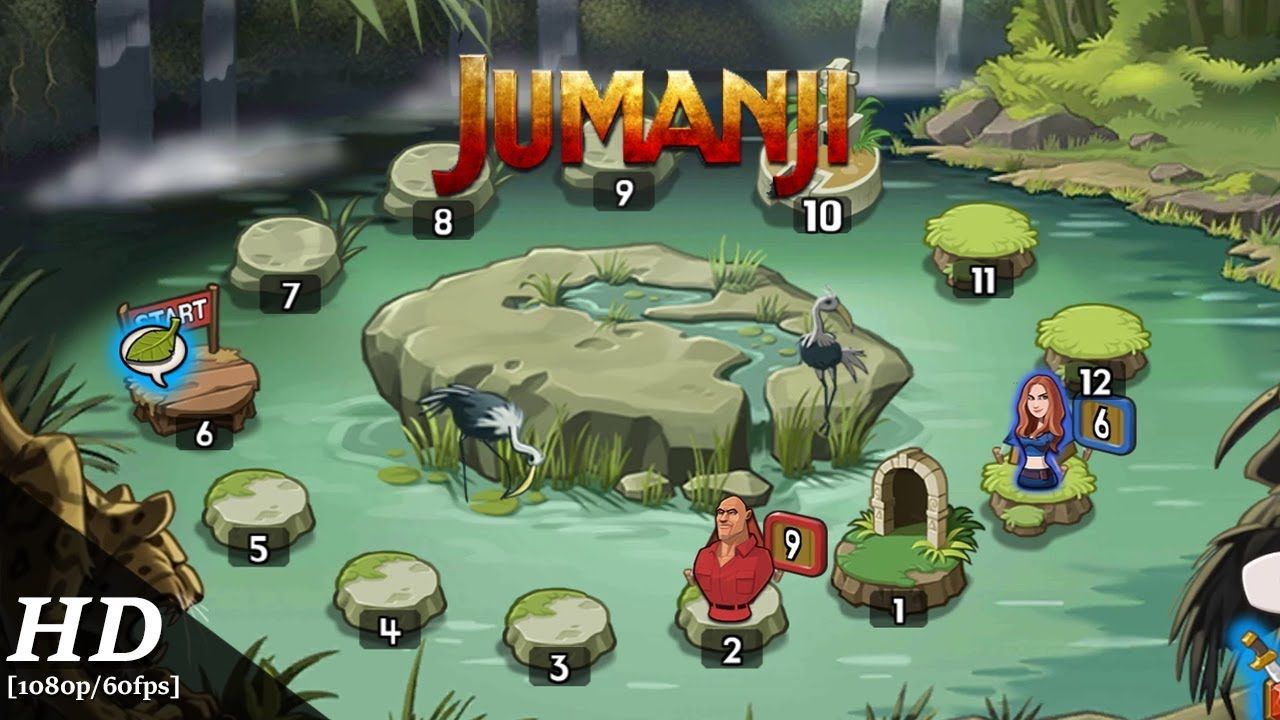 But I digress, they get sucked in, meet Alan Parish, and Van Pelt, get involved in shenanigans, realize Alan’s the good guy who got sucked into the game long ago, and that Van Pelt is the villain, someone who exists as a part of the game, and is virtually unkillable.  Seriously, if he gets gored by a rhinoceros horn, he pulls it out, regains his bearings, and carries on.  If he gets eaten by a killer plant, trampled by an elephant, he gets back up for more after a while.  This basically applies to just about everything in Jumanji.  You can fight them, but you can’t kill them.  As for the players who got sucked into the game, that’s another story.  But in all fairness, we just don’t know, because we never see anyone really ever get killed in this thing, it is a 90s kid cartoon show after all (pussies).

This is a show that takes the traditional/easy route that most shows back then took.  There wasn’t really an ongoing story connecting most of the episodes together.  Each episode it basically stand-alone.  Sure, there were some episodes that introduced a re-occurring character off and on, mainly adding another villain to the list alongside Van Pelt, a couple of which I found to be quite fascinating.  But other than that, and the occasional episode which showed Peter and Judy having adapted to living in Jumanji about as well as Alan does (which should be expected), there really isn’t much there that would make one eager to see the next episode.  There isn’t even a 2-parter.  So the show can get monotonous quite fast.  Especially when nearly every episode starts out exactly the same.  Plus every episode seems obligated to say the line, “Cool beans!” at least once.

But at least each episode has a typical theme to it, all linking to the “Clue” that is giving in the middle of the Jumanji board right before Judy and Peter get sucked in.  Each episode pretty much goes like-so: Peter and/or Judy do something bad or questionable in the real world, they roll the dice for Jumanji (and the dice rolls honestly don’t matter one bit, their pieces never move, they never make any progress towards the end, and sometimes all they would have to do is damage the board game and piss it off to get sucked in, so the dice are fucking pointless), the Jumanji board gives a clue that either metaphorically links to their unethical behavior, or they get involved in an adventure relating to the clue that ties into the moral lesson of the day somehow.  Rinse and repeat each episode thereafter.  And they always scream when getting sucked in (they never get used to it), and they immediately get attacked by someone or something right before rolling the opening title sequence.

And speaking of that opening title sequence, there’s something peculiar I noticed about it, mainly regarding the music during the 2nd half of it.  The Godzilla Animated Series ripped that melody off, shamelessly (though to be fair, it was a better show than this one).

Other than that, the only other real laugh I got out of the series was in episode 2 (season 1) when Judy is sneaking into Van Pelt’s house, he stirs and asks something like, “Who is it?”  And Judy responds, “Maid service”  And Van Pelt responds, “Oh, alright.”  A few seconds later he wakes up and says one of the best lines in the entire show.

Other than that, there were a some parts in the show that may have been a little funny, but nothing that would raise the show up to that high of a pedestal.

And since the show gets monotonous, I’ll just list the episodes I thought were worth a watch, and give some brief snippets as to why, just in case you are curious to give this show a look (and also to prove that I watched the damn thing all the way through):

Episode 1: Well, it is the first episode, plus you’ll hear some animal noises straight out of Jurassic park, mainly those spitters.

Episode 2: Has that great Van Pelt lines I mentioned earlier, and it has a sound effect straight out of a Sonic the Hedgehog Sega Genesis game near the end.

Episode 3: First of all, Moana ripped this off, mainly with the Manjis.  Oh yeah, this show has Manji people, little people with big-ass masks who are basically Jumanji natives.  The episode subtly hints that this is the fate that befalls children who play the game and give up hope of ever leaving and become part of the game by becoming a Manji.  Something that begins to happen to Peter in this episode.  Actually a tad bit disturbing in that context.  And speaking of disturbing, there’s a brief moment where they threaten to shove a talking key up a rhino’s ass.  But anyway, I guess the Manji’s are called that because they put that “manji” in “Jumanji,” and I guess it’s better than calling them Jews.

Episode 5: We are introduced to the Master Builder, who’s a fun little villain, intentionally monotone with his voice, and does a lot of experiments and technological advancements.

Episode 6: We are introduced to Jumanji’s inner workings, and come across this grim reaper-like figure who I guess is the Jumanji spiritual overlord or something.  He’s never really explained, at all, in this entire series.

Episode 12: A better season finale-like episode than the one that came later.

Episode 1: Decent episode about a war between 2 races of giant ants, the differing perspectives of right and wrong and war.

Episode 3: If you thought the animation was a bit strange before, wait until you get a load of this episode.

Episode 6: The Master of the Game.

Episode 9: Worth it just for the unintentional hilarity of the super squirter commercial.  Plus Alan sounds more like that starfish from Spongebob Squarepants than ever before.

Episodes 1-3: All are solid, and probably about as good as this season gets, except for episode 9.

Episode 9: The Ultimate Weapon.  Man how I wish this could somehow be combined with the last episode to give the series the good climactic finish it needs.  The high point of the season, and definitely one of the high points of the series, where all the major villains and the protagonists are fighting over this crazy weapon that has the power to destroy all of Jumanji.  Almost Lovecraftian.

Episode 14: Ok, so this is the last episode, and it does end the series.  Alan finally gets out of Jumanji, along with Judy and Peter.  The problem is that this episode absolutely sucks.  If you thought the writers gave no fucks before, it becomes more evident than ever that was the case here.  This episode is a glorified recap episode, showing clips from past episodes 80% of the time.  This might have worked it better hands, but it absolutely does not work here.  It’s fucking boring, and I was just waiting for the fucking thing to end at this point.  No final conflict with Van Pelt, no building off of much of what came before except for looking at a clip show.  It just goes out with a whimper.  But at least it gave us an ending, which is more than can be said for most animated kids shows of this era.

So overall, the show is just mediocre.  And it’s frustratingly contradictory at times.  Peter and Judy are shown to have become quite adept at handling themselves in the jungle after a while, able to climb steep walls, learn how to handle animals, know what to avoid, etc.  Not to mention the ethical dilemmas they overcome.  And then an episode occasionally pops up that says, “Fuck all!” to that stuff and just presents the same damn ethical situation again and they handle it as if it’s the first time and that they’re still terrible people after all that time.  Plus there’s an episode that tries to convince us that Peter isn’t capable of climbing out of a pit because he’s too small when he was shown to be capable of climbing a steep cliff only 1-2 episodes ago!

Might be worth a look-see for anyone who’s curious, but it’s not a keeper.  There were better animated kid shows made back then compared to this one.

PS: Oh yeah, and Tim Curry voices a couple of characters, including Van Pelt.  So the show has that going for it.