So first it starts off as a rip off of the run out of the temple at the beginning of Raiders of the Lost Ark, then as a rip off of the bridge scene from Temple of Doom.  I was expecting an invisible bridge to come up at some point, but that didn’t happen.

The dubs in this are annoying at times, especially with those 2 fairies (cosmos). They needed to shut the fuck up more times than I can remember. It’s like nails on a chalkboard with those two (and this also applies to the 1964 film this is a sort of remake of too). By the time they started singing the third song, it became instinctive to yell back, “Shut the hell up!” The fifth time they started singing, I wanted to kill them.

They also find several moments throughout the film to hammer in the environmental message. Pollution and damage to the environment is bad, and we’re dooming ourselves the more we doom the planet, we get it.  So now we’ve got our green peace Godzilla film that I worried the Biollante film would get.  I hope you cunterbergs are happy.

It’s more green peace than the Godzilla vs The Thing movie from the 60s (which was false fucking advertising, because that forlorn hope was never going to meet expectations, let alone not have false advertising).  That film focused more on greed than the environment.  Nowadays, it’s the green peace assholes who are the greedy ones.  I want to see a film where the green peace assholes are portrayed as the actual greedy assholes and villains who manipulate people and make things worse.  Wait a minute, we got that already.  Fuck shit hell damn, nevermind, forget I ever asked for that.

What positives does this film have?  Well it does have a nice sea battle midway through the movie between Godzilla, Mothra, and Battra. In fact, it’s probably the best fight in the movie.

They did manage to outdo themselves with the Godzilla entrance prior to the final fight when he walks out of an erupting Mount Fuji. More impressive than his entrance in vs Biollante. It’s a sign of the visual spectacle to come for the final battle ahead.

And what a visual delight that final battle is. It is impossible to tear your eyes away from the awesomeness of the moth dust, laser beams, Godzilla breath, and all the other colors that show up. Mothra has never been better than in this movie in terms of putting up a decent fight. Though they did buff Mothra and Battra too much in my opinion. In every other Godzilla film, Godzilla could take Mothra out with 3 flame blasts tops. In this movie, it doesn’t seem to hardly do anything against Mothra. You can’t convince me that a moth can take that much damage. Also, the final fight goes for a tad too long. It drags too much, with not enough variety in the monster attacks (the previous vs. Ghidorah film almost suffered from this problem, but this film definitely crosses that line).

Another big problem, they loop the same music track too many times. It gets monotonous. Speaking of audio issues, what the hell was up with giving Battra the same yell as Rodan? 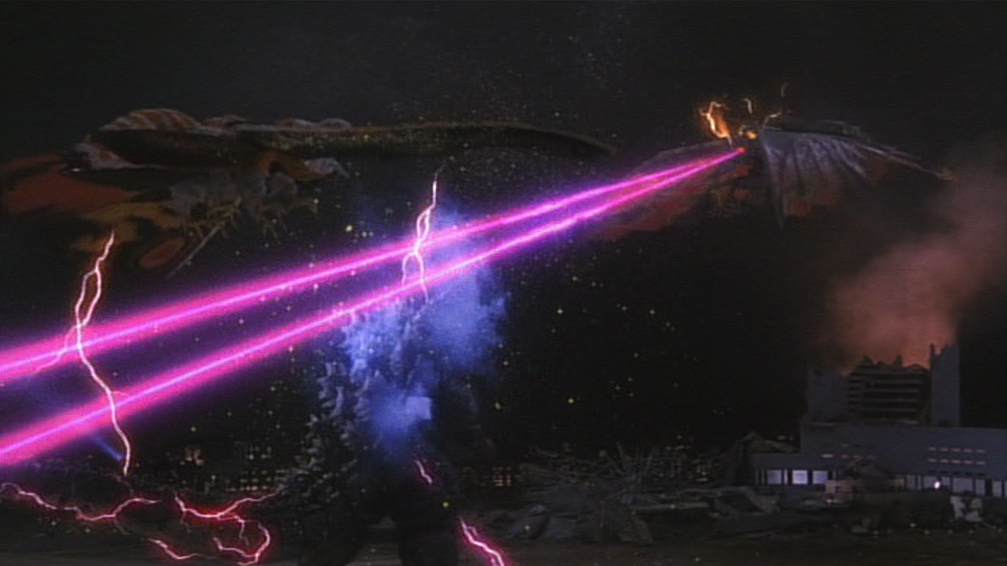 Overall, it’s not bad. I consider it as more of a Godzilla film that you watch in the background while doing something else, than a serious film that you sit and take everything in. This is especially the case for the finale fight. It’s enjoyable enough to be worth a watch, though the original from the 60s is barely better in my opinion.

Oh, and if the military can’t even take down the larvae form of Mothra, then how does it expect to have a chance in hell against Godzilla?

Once again, Miki the psychic does nothing in this film except exist. Here’s hoping she puts her psychic powers to use in some way in the next film, and not let the potential for it set up in the Biollante movie be for nothing.

Music wasn’t as good as in the previous films. That’s not to say it was bad, it just doesn’t have anything too memorable about it, or anything in particular that stands out that wasn’t done before.