Do you ever get the feeling that everything in America is completely fucked up?  You know that feeling?  That the whole country is like one inch away from saying, “That’s it!  Forget it!”  Think about it, everything is polluted: the environment, the government, the schools; you name it.

So begins this little movie about a high schooler launching a pirate radio station aimed at the other high schoolers in his city.  Before social media and youtube videos, there was pirate radio.  And yet not much has changed in regards to the message this movie has.  If nothing else, it seems as relevant as ever, if not more-so.  The topics the film tackles are not only relevant today, but other issues plaguing society today can easily draw parallels to the stuff this film has to say.

The main point of contention is school, followed by parents.  In this film’s case, the protagonist played by Christian Slater finds it easy to rant about the unfair practices of the school, which gets expanded upon further and further until it is revealed that this isn’t just some petty criticism about how hard school is.  It turns out the principal implemented some policies that are questionable at best, illegal at worst.

And it’s this first point that is worth dwelling upon.  Although the film is one-sided about all this, it is worth discussing the pros and cons of it considering the knowledge we (or at least any half-assed independent individual who seeks to gain knowledge outside the system) has about school policy.  So it is discovered the principal (and others who were involved I’m sure) has been expelling students who had scored low on the S.A.T., which causes the school’s S.A.T. average among students to become inflated.  A harsh method that may doom the expelled to living a life without a diploma, yet it also keeps the school funded and doesn’t have many dumb students bogging everyone else down.  And from what I’ve seen of the expelled students, they aren’t really attempting to make anything of themselves.  Then again, “They’re just kids.” 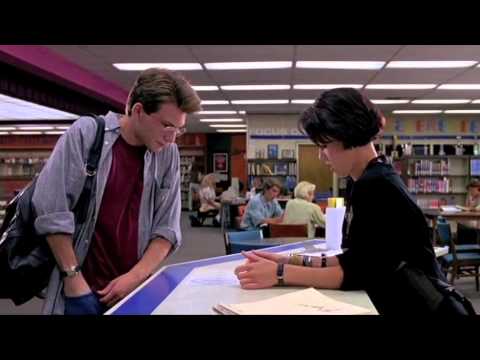 Contrast that with the No Child Left Behind policy that’s been adopted since the early 2000s.  Nowadays, it’s not so much the students being expelled to inflate the S.A.T. scores so much as curving the scores, giving handicap points to the “minorities” to boost their scores, etc.  So now the S.A.T.s are inflated once again, but for completely different reasons, and allowing dumbass kids to drag the others down with them.

Not to mention the pressure it puts on students due to expectations that normally can’t be met except by the best of the best.  Creating the “model student.”  And the film depicts how some of these model students are not happy with this facade they put on.  Hell, this isn’t the only film to do it.  Plenty of films just from the decade this spawned from have several examples of model students who either aren’t as cracked up as they appear to be, are suffering from depression and stress from trying to keep up appearances, etc.  That’s not to say there aren’t legit model students out there who are what they appear to be, but others shouldn’t be forced to try and live that way.

And this is where the aspect of the parents come in.  Parents who want more than to just bring out the best in their son or daughter.  They want what they think is best for them, and it’s common knowledge at this point that what they think is best for them isn’t always what is actually best for them.  But they don’t care enough about that to listen to their children seriously.  So their children have a difficult time talking to them about their problems, let alone working them out.  It can get to the point where talking is pointless.

So naturally, if they can’t talk about their problems to their own parents, they’ll seek input from other sources, or drive themselves to suicide (as was the case for one unfortunate soul in this film).  Which is where Slater’s character comes in, as an anonymous voice over the radio.  He speaks brashly, without a filter, being as foul-mouthed and offensive as he wants (primarily for comedy); and doing so allows him to talk about subjects that these dejected students not only relate to, but also wanted to get off their chest but find themselves unable to do so.  They find a voice that expresses what they want to express.  A voice that talks about things they want to talk about, says things they want to say, and offers suggestions on what they can do about it; which some of them end up doing.

We at the F.C.C. feel that democracy is all about protecting the rights of the ordinary citizen.  Unregulated radio would result in programming of the lowest common denominator, the rule of the mob.

Imagine, a fucking political hack in charge of free speech in America!

Of course, once the school faculty, and most parents, find out about this anonymous pirate radio host, they discuss ways to stop his influence, and then ways to shut him down.  Things escalate, from punishing students who sell cassettes of his program (and create graffiti of his best lines), to getting local authorities involved, to eventually getting federal authorities involved via the F.C.C.  The inevitable discussion of free speech is brought up of course; a film like this is destined to go down that road.  But it’s one-sided, in that he shouldn’t be shut down and speech shouldn’t be suppressed.   And it should be one-sided.  After all, to a lesser extent, the same thing was happening to various students all around the campus, which created many of these problems they wanted to rebel against to begin with.  Even a teacher sympathetic to the students’ cause tries to speak out against some of the mistreatment, only to get fired by the higher ups.  That being said, the students go a bit too far at times, in my personal opinion, with regard to how they freely express themselves, such as the graffiti.  On the other hand, what other way to communicate their frustrations towards those who won’t listen?

And this is where the parallels of today can be found.  Of course, pirate radio isn’t currently in-style as it was back then.  Nowadays there’s podcasts and videos which can be found online with people speaking and ranting in the same way Slater’s character does in this film.  And the escalation still occurs.  Alex Jones too extreme, he gets banned from every major social media website, from Twitter, Facebook, YouTube, his InfoWars app banned from all major app stores.  Twitter banning conservative speakers, Facebook doing this same, YouTube following suit, Amazon banning books they deem hateful/offensive, universities banning conservative speakers, and so on.  In this film, being unable to speak to parents and school staff brought the protagonist to speaking over the radio.  Being unable to have books published on Amazon causes writers to sell on their own website, or through other independent publishers.  Being banned from Twitter causes users to flock to alternatives like Gab.  Banned/removed from YouTube causes users to migrate to BitChute.  Next thing you know, the Internet will be as heavily regulated as radio stations were back then, with the F.C.C. (among others) knocking at your door should you talk about something that shouldn’t be talked about, or in a way they don’t like.

I’m sick of being ashamed. I don’t mind being dejected and rejected, but I’m not going to be ashamed about it. At least pain is real. I mean, you look around and you see nothing is real, but at least the pain is real.

And yet there are warning signs to be seen over this lifestyle of being a radical speaker.  Slater’s character is shown to be socially awkward, having difficulty expressing himself around others, yet feeling the frustration of living as an self-made outcast.  But he made himself unique out of the others because of his talent with being entertaining, edgy, and philosophical on the airwaves.  Today, anybody can be that way.  And there are so many, it’s hardly unique anymore.  YouTube videos, social media accounts that proclaim to be the best at something, they’re a dime a dozen.  It would take a lot to stand out (assuming your natural charisma isn’t enough), and even then, it would be difficult for others to find your voice/opinion on the web.  And this social media generation isn’t exactly churning out healthy individuals, hooked on that dopamine rush and all.

You see there’s nothing to do anymore. Everything decent has been done. All the great themes in life have been used up, turned into theme parks. So I don’t really find it exactly cheerful to be living in the middle of a totally exhausted decade where there’s nothing to look forward to and no one to look up to.

… there is one factor to consider.  The appeal of Slater’s character in that community wasn’t because he was just a (pirate) radio host.  It was because he spoke about topics deemed relevant by the students, the intended audience.  It was because he had ways of addressing the topics that made sense to the listeners (though this outraged and triggered others that demanded his silence, the same “others” causing the topics to be relevant to the audience in the first place).  His voice was unique in how it addressed those social issues.  If his voice wasn’t around for them to listen to, just as there aren’t any serious conservative speakers in the mainstream media, let alone radical foul-mouthed ones that the more modern liberal speakers have in abundance, then another would arise sooner or later.  Because when there is a social environment that silences the heartfelt opinions and legit grievances of enough people, sooner or later, a voice inevitably rises that will cause them to rebel.  A voice that shouts out an idea, a thought, something that cannot be killed due to suppression.  And it will inevitable spread until the unheard are finally heard, or until they’ve determined actions speak louder than words.

I like the idea that a voice can just go somewhere, uninvited, and just kinda hang out like a dirty thought in a nice clean mind. Maybe a though is like a virus, you know, it can… it can… kill all the healthy thoughts and just take over. That would be serious.