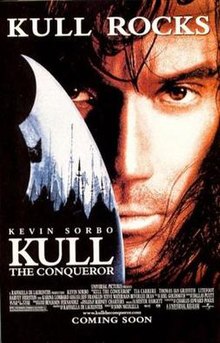 This movie was made for me. I knew I would be in for a good time when the film opened with a fight sequence with Kevin Sorbo and his long chest-length “metal band” hair with heavy metal music being played over it all. This is how I like my cheese served! There so much of it, a glass of red wine is mandatory!

First I’ll say that Kevin Sorbo, he, uh, really can’t act.  But you still gotta love him. He’s like a polar opposite to Reb Brown for bad acting.  Reb Brown is wooden, but awesome when he yells and shoots heavy weaponry and is energetic.  Sorbo is almost never convincing, but he is less wooden and can put on some good sword and sorcery fight scenes.  It’s a shame neither of them were ever in a movie together. The 90s could’ve used it, and the best we ever got was this one episode from Hercules The Legendary Journeys which had a piss-poor fight scene between the two where neither one of them really did anything, and they took the whole idea of “the art of fighting without fighting” too literally. I mean, Kevin Sorbo was Hercules, and Reb Brown was Ares, the God of War. How do you fuck that up?

But anyway, this is a pure Conan rip-off, sort of. Originally, this was supposed to be the 3rd Conan movie titled Conan: The Conqueror, but Ahnold turned the role down, and so Sorbo stepped in along with a few small script rewrites. It kind of shows too, but trust me when I say that this cheese-fest greatly benefits from this, because the plot gets downright ludicrous in the most entertaining of ways. 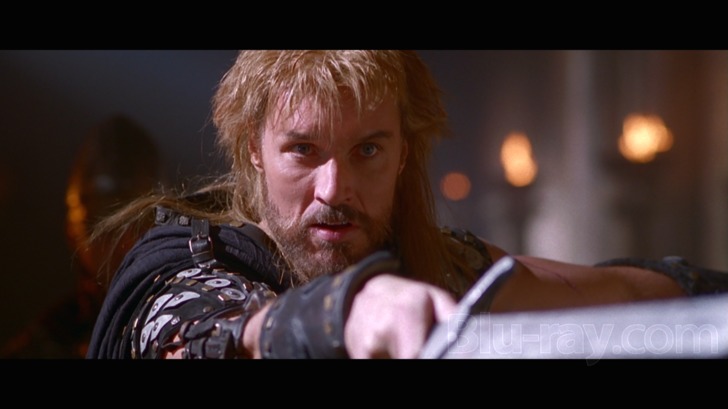 And Taligaro, played by Thomas Ian Griffith, really cheeses it up with his heated rivalry with Kull. The way he stares at Kull, with that look of, “IIIIII’m better than you aaaaare,” is just great.

And then there’s the smokin hot antagonist Akivasha played by Tia Carrere; oh how I wish she was his main love interest. But then again, if she switched roles with Karina Lombard, the villain wouldn’t have been as good. After all, the whole idea is that she’s supposed to be a smoking hot seductress fire goddess (at least up until the finale, then she’s just a fire goddess).

The fight scenes, while nothing spectacular, are entertaining and well done, especially the fight in the ice cavern. That fight deserves special mention because of the heavy metal playing, plus Kull taking weapons out of the hands of frozen corpses and using them against everyone; it’s kind of awesome.

The film must have had a budget that is better than it deserved, because aside from some fire, green screen, and dated 90s cgi effects (this is no Jurassic Park in that regard), this has some pretty good set designs, props, and practical effect work on the fire goddess during the finale. She looks downright scary and evil for one moment with a face that only the devil himself could have, before completely transforming into something completely (albeit intentionally) over-the-top. And then it all culminates in a scene that should go down in legend the the greatest gross-out laugh-out-loud make-out scene in film history. I love this movie!

And there are plenty of other tidbits to keep you going up until that moment. Aside from the entertaining fights, and the portion of the movie where Harvey Fierstein shows up and feels completely out of place (probably how some people feel about Chris Rock in The Fifth Element, except that I didn’t mind his part in that movie), there are some great lines, so-idiotic-it’s-entertaining moments (why are the guards standing around and letting their king get killed? why isn’t Kull revealing himself to still be alive in public after the announcement that he’s dead?), and action sword and sorcery cheese delivered in the best way possible that only the 90s could do.

It may be one of the decades that produced some of the worst movies of all time (in the they aren’t entertaining in any way, not even the so-bad-it’s-good way), but when their films hit like this, I forget all about the other shit and fall into a state of pure metal rockin’ bliss. I can’t recommend this movie enough to anyone who is looking for a film that rips off Conan in the most entertaining ways since The Beastmaster, Deathstalker, and The Sword and the Sorcerer.  Conan: The Barbarian should be taken for granted.

PS: I hadn’t seen this film since I was a kid, and in 1997, that was the only time I saw it. So watching it again now, now remembering very much of it, a spark came into my head when I saw the demon face on the moon. And I thought to myself, “For some reason, that seems more important and familiar to me than anything else in the movie. Why is that?” It wasn’t until the film was halfway over when I realized, “Oh! That’s why!” And then I couldn’t wait for the finale. If you’ve seen Deadly Friend and grew more eager in anticipation for an upcoming scene after that old bitch-lady takes the basketball away from these kids, you’ll know the feeling.

PPS: Oh yeah, this line is in the movie:

“I have altered our pact. Pray I do not alter it any further.”