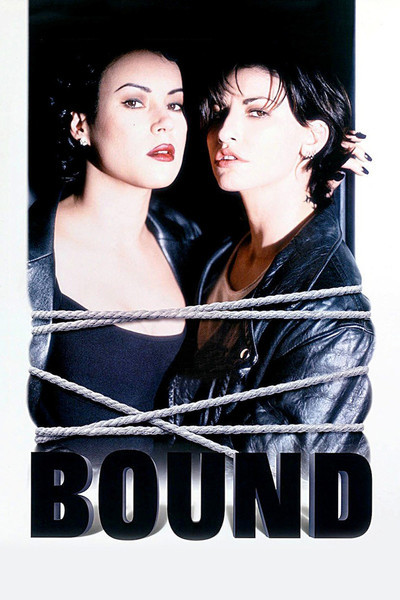 Alright, time to give women their due.  There is a movie in existence from the 90s (well duh; you’ve probably read the title) directed by the Wachowski Brothers (as they were known as back then), which has two female protagonists.

One of them is a dike played by Gina Gershon.  I’m not saying that to be hurtful or anything, that’s exactly what she is.  She acts like a dike, goes to dike bars with other dikes that she likes to hit on.  But she hasn’t really been getting much luck lately.  So she basically has blue ovary syndrome from Showgirls.

The other is a woman (played by Jenniffer Tilly), who was born with a voice made for being a sex-line operator, but decided to settle for being with the mafia while aspiring to be an actress.  So one day she decides she’s had enough of it and decides to try turning lesbian because she’s sick of banging mafia goons/patrons.  I think there’s some sort of “woman’s journey to Hollywood” story in there somewhere.

So the relationship-building and pro-lesbian stuff aside, the film is also about how these two women plot to steal from the mob and get away with it, scoring a victory over men.  And plenty of LGBTQuadracunts praise the film for that.  Many praise it for being one of the best films of that genre, for diversity!  To that I say rubbish.  This film shouldn’t be praised for being an LGBT film.  It should be praised for being one of the best all-around thrillers ever made.  It just so happens to have lesbian protagonists.

Though that being said, I can see why those people would want to cheer the film for supposedly being inclusive in that way (even though I’m pretty damn sure anyone with good taste in film would enjoy this flick).  Hollywood Studio execs wanted the script changed so that one of the roles, most likely Gina’s, would be rewritten for a male part.  The Wachowski Brothers basically told them, “Lick our cunts!” and the rest is history.  Because I have to agree with them on this, there were too many films like that out there, with a male helping a woman bound to a group of shady individuals.  Like most noir thrillers do (in fact, isn’t that the plot to 90% of them?).  This allows it to stand-out more, though the Wachowski style of directing would’ve also been enough to make it stand out considerably.

While the relationship-building and sex tease, cunt-blocking, and then divulged sex scene are nice and all, the real meat of the film comes when it gets to the halfway point.  When they plan on stealing from the mob, how to go about doing it, and how the movie shows them doing what they discussed, while they’re discussing it (great editing trick for slick pacing).  From that point on and for the rest of the film, the movie gets tense as fuck.  I mean, man, the anxiety and tension just continue to crank up.  There are very brief segments that allow for the audience to take a bit of a breather, where the tension gets dialed down a notch, only for it to dial up another couple notches soon afterwards.  A true edge-of-your-seat thriller.  Alfred Hitchcock would be proud.  And I mean that.  I seriously think this is the best modern attempt at making a thriller on-par with Hitchcock films, and nothing I know of has even come close to that since this movie.  Over 20 years ago.  In the 90s.  And people wonder why I think that’s the greatest decade ever.

One of the reasons this tension works, aside from things not quite going as planned, and being forced to strap in for the long-haul in a scenario that continues to get more and more unpredictable, is the not knowing for sure if the lesbian relationship is as strong as one or both of them may think it is.  It is even brought up during the planning.  “How much do I know you?  How much should I trust you?”  Similar parallels are brought up with the mafia guys themselves, one of which acts as the other main character, played by Joe Pantoliano.

Now, you see, I thought Gina was going to own this film like how she owned Showgirls (she was better than the protagonist, you know it’s true).  And she was very strong here too.  But then Joe comes along and gives an unbelievably riveting performance during the entire second half.  His face expression of fear, paranoia, hopelessness, rage.  He managed to rip this film right out from under Gina, and that isn’t an easy feat.  He should’ve been nominated for an award for his role in this film, because he totally killed it.

As for Jenniffer, eh, she was just ok.  She had the same tone of voice throughout pretty much the entire film.  Seems to be a one-note actress here.  Though to be fair, that sort of works in her favor to a small extent.  On a first time watch, it makes the viewer wonder what her mindset is.  If she is desperately trying to act calm to keep her sanity throughout all that is going on, or if she’s calm because she has ulterior motives, such as potentially trying to take all the money for herself.  But in hindsight, she’s subpar compared to virtually everyone else in the movie.

So there’s that theme of trust.  Both the girls believe they trust one another.  But if nothing else, they do know that the gangster played by Joe doesn’t trust this other gangster he considers a brother.  They don’t care for each other very much.  So the women use that to their advantage, making the gangster think his brother took the money to frame him.  And the distrust would cause him to believe this lie, run for the hills, and allow them to make off with the cash Scott-free.

How surprising it is to them then that they find out the hard way that people can become very unpredictable when placed under a high deal of stress.  He not only acts unpredictably, not taking the actions the women planned on him doing.  But he also becomes much more determined and capable, much to everyone’s surprise.  In the same manner, the women also act unpredictable (to him), determined, and capable, because they are also inevitably put into such a state of high tension.

It goes both ways.

Allow me to get a bit personal for a minute.  When I watched this movie, I started getting a nostalgia hit that I didn’t even remember until various scenes came up.  By the time the film was about three quarters of the way through, maybe sooner, I started to realize that I had seen this movie before, but had completely forgotten about it.  It brought me back to that time when I was in my teenage years.  When the IFC channel was still great.  When it would air films like these commercial-free and uncut.  Back then I was just a horny-as-fuck teenager who just wanted to watch anything and everything that had sex and nudity in it.  So late at night, or on days when I was home by myself, I would browse through the channels, looking for anything that was R-rated, unrated, or NC-17, and was rated that way because the description stated it was due to contained N (nudity) and SC (sexual content).  Back then there was no DVR, there was no means to record what was on outside of using a VHS tape, or a DVD recorder.  So there was a time when this film came on, and I managed to catch it early on to where I caught the fingering and scissoring scene.  Normally that would be when I started switching channels to see what else was on that could have sex and nudity in it, but I ended up sticking with this film for some reason.  The further it went on, the more I got hooked.  And I wound up watching it the entire way through.  Guess that’s how good the film was.  And either I was too young to fully appreciate something that held my attention for that long, or it must’ve been late at night which contributed to making the memories fuzzy until they finally faded.  But watching it the whole way through allowed me to relive a bit of that time period, while still appreciating the movie as it is now.

So this film ended up being a nostalgia hit when I wasn’t really expecting that.  Which makes me wonder what else from that time period I may come across which has that same surprise gift of nostalgia and entertainment.

Anyway, highly recommended for those interested in a good thriller.  Though I do have to wonder why it is that after this, and The Matrix, that they haven’t managed another great film yet.  Cloud Atlas is overrated, the Matrix sequels weren’t all that great in the overall scheme of things, Jupiter Ascending was meh, and I’m not interested in Speed Racer.  I’ve heard some good things about Sense8 though, but I don’t have Netflix because fuck Netflix.

PS: In all seriousness, this is another thing I miss about this time period.  From films like this to when Brokeback Mountain got released (2005).  Aside from some Christian outcry (which really did start to mellow out during the early 2000s), people didn’t make these types of films which many are ready to label as LGBT films.  They didn’t have that label, they didn’t need that label, and they weren’t promoting some damn inclusivity about it being a film for those people.  It was a film they wanted everyone to see.  They wanted everyone to be entertained by it regardless of sex/race.  It wasn’t a film intended to make a statement, it was a film intended to show a story with those characters and their arcs.  The themes and lessons to take from it were more abstract and less political, and any political message to be gained from such films was subjectively made by those who read that much into it.  Which is why the best films with lesbians/gays/trannies in them are those that aren’t out there to make a political statement.  Back then they were more focused on the actual aspects of film-making that make films great.  I miss that about the 90s and early 2000s, and it saddens me how many have lost sight of that.  At least there’s works like these to fall back on.  However the future turns out, in spite of how things are now, I can at least say thank you for the memories.