“If you lose a son it’s possible to get another. There is only one Maltese Falcon.”

I’ll tell you what, you’re engagement level better be 5/5 with this movie, or you’re going to miss plot details so important that you will probably get lost with the story. Not since Bullitt, Miller’s Crossing, or Inception have I seen a crime film that demands so much attention from the viewer.

Humphrey Bogart is an absolute slick badass who is every bit as good with his words as he is with his fists. And he knows it, which is why he also plays a scoundrel and an anti-hero who “may” be as corrupt of a detective as the criminals he investigates. I have seen African Queen, and Casablanca (didn’t care much for the former, don’t remember much of the latter), but it’s this film that made me realize why this guy was such a big name during that era of film-making.

So, onto the analysis. The title itself, The Maltese Falcon. Maltese has a two-fold definition, both of which I’m positive are important. Firstly, Maltese refers to someone/something that is a resident of Malta. That’s where the Maltese Falcon statue itself comes from, so that’s self explanatory. The second definition refers to a small breed of dog with a long silky coat. I considered the second definition important once the film brings the viewer to the office of Spade and Archer, two private detectives, Spade being played by Bogart. If you observe the desk of Spade, you will notice that there is a small statue of a falcon and a dog on it. That’s no coincidence, and an obvious use of mise-en-scène (mine as well as keep up the French terms, as noir is also one). After seeing another dog statue in the District Attorney’s office, it’s my theory that the dog represents justice, doing actual police work, a detective’s code of honor, etc. The falcon itself, well, they say it’s “the stuff that dreams are made of.” Put the two together, and it’s like investigating/chasing a dream.

This kind of symbolism can also be found in Gutman’s abode (he’s also named Gutman because he’s fat, hahahah). Above his fireplace are two small horse statues. This represent galloping after or chasing something. Spade has a horse picture at his home, indicating that he is a detective who will chase after leads. The horse picture at home, the dog and falcon statues at his office, indicate he is a detective who his heavily invested in his work, at least during the course of this movie, because his work follows him to his office and home throughout the film. Gutman, obviously, is chasing after the Maltese Falcon itself. 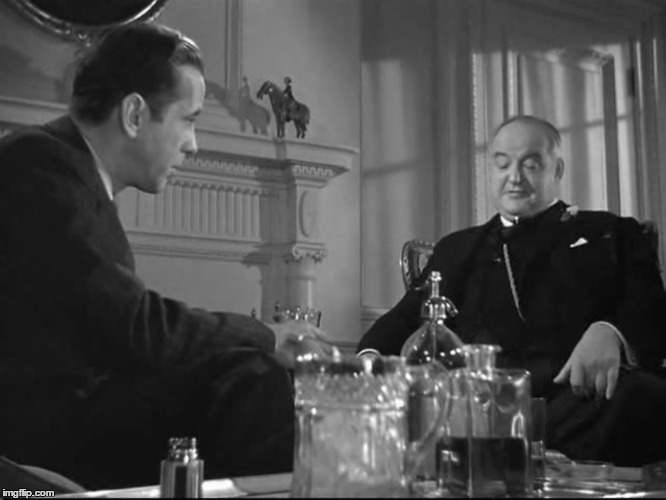 Another thing I thought about in this film is the use of colors on the coats the characters wear. This is where I’m likely stretching things. The darker the coat, the more corrupt or involved with dirty dealings a character is. Gutman, for instance, is always wearing the darkest suits in the film, contested only by Miles Archer’s widow. Gutman’s is always dark because he’s obviously the most corrupt and dirty of all the characters in the film. He’s willing to have people killed and bribe whoever to get what he wants. Mrs. Iva Archer is in black from head to toe the entire course of the film. This is when my thoughts on clothing style could be called into question, as she is a woman in mourning, and isn’t involved in the dirty dealings that Spade is getting involved with. But upon a second viewing, I picked up on the fact that Spade and Iva were once in love with each other, and may have been lovers up until Archer showed up and eventually married her at some point. Others know this, which is why a couple people question Spade and Mrs. Archer’s motives, wondering if they were involved in the death of Miles Archer. Despite her state of mourning, Mrs. Iva Archer asks Spade if he killed Miles because of this. But she is likely asking this question out of hope that he did, so that she can be with him and they can be lovers again. If that’s the case, that would keep my thoughts of use of clothing in this film intact, and would make her not so pure of a woman. Spade even mentions offhand that she probably hates Miles. She once again confirms the fact of her belonging with dirty people when she calls the cops on Spade, because she sees him with another woman, his client Brigid, who originally hired Spade and Archer. She does this out of jealousy, because she believes Spade to be sleeping with this woman instead of her.

And then there’s Brigid herself. When she first appears, she has a distracting black headdress (if that’s what you call it) on her head, indicating that her head is filled with dirtiness. Dirtiness in this case being lies. During the rest of the film, she dresses in more white colors, but by the end of the film is back in the darker set of clothes, now fully stuck in the dark world she tried to dip her hands in but stay out of, but has failed. At certain points she wears all white, but then there are times when she wears white but sits in a dark chair, or has on dark gloves, or dark heels, or has the dark headdress back on her head again. This indicates hypocrisy, which other characters in the film are also guilty of (including Spade himself).

Another interesting bit of symbolism can also be found briefly on Spade’s desk as he burns the address to Brigid’s home after briefly looking it over. The address is burned next to a ridiculously small book (it’s probably a prop used for decoration rather than a book) that is labeled “DEPENDABLE”. I feel this represents the idea that Spade doesn’t have much to depend on in this world, that what he depends on isn’t anything material or outside of himself because that would cause him to be burned (metaphorically). Instead, he has to depend on his own instincts and knowledge, which is kept in his head. He acts accordingly by not trusting anyone, Brigid, Iva, or even the police investigating him. His experience with detective work has taught him to be this way, and he is fully justified in this, as just about everybody tries to deceive him.

One last metaphorical element to the story. The names of Samuel Spade and Miles Archer. Spade says to Archer in a joking manner, “You’ve got brains.” He says this because he knows that Archer has decided to take the case and follow Brigid because he’s not doing so due to his intelligence, but due to his lust. Brigid is a beautiful woman, Iva doesn’t like him (as implied at several points), so Archer figures why not follow her, maybe he’ll get lucky. It’s similar to his heart being hit by Cupid’s arrow, hence the name Archer. Unfortunately, his heart ends up taking a bullet instead. Samuel Spade’s name, I believe, comes into play by him metaphorically burying his partner’s name, but also honoring his memory in his own way. This is discussed directly near the end of the film.

I enjoyed the hell out of this movie. The pace is quick, the dialogue is smart and witty, and Bogart is awesome. He is in constant danger, and so he is consistently using his experience and methods to keep him one step ahead of death, or arrest. He does so when he doesn’t have much of an idea of what situation he has fallen into. At several points I was asking how selfish he really is. Is he doing this just to save himself, or for money, or for something else? There is one moment where his intimidation and badassnes is on full display when Cairo draws a gun on him. As he gets up and walks with Cairo, you can tell from his height, face expression, and figure, that he is in no way intimidated by this man. Once he inevitably gains the upper hand, his smirk says everything, as does the look of dread on Cairo’s face. There are several moments when he just has to smile and laugh despite how much of a pickle he is in, just taking in the fun of the moment to alleviate the stress, as evident by how his hand shakes uncontrollably at one point after confronting Gutman.

Despite how awesome he is, he is also a scoundrel, and a cold-hearted bastard at times. He is more than happy and willing to take money from people, especially Brigid, even when she seems to need it. He talks shit to other detectives and to the district attorney, and he acts care-free about his partner dying and of the widow’s grieving. And despite all that, I still had to root for him, because damnit he’s cool.

If there is any flaw in the film, I can only catch onto one. There is one instance when the editing got distracting. The camera cuts quickly during the scene when Spade is talking with Iva for the second time in the film. It’s just a minor complaint in an otherwise very entertaining film. Easily one of the best oldies I’ve seen.

P.S.: Apparently there is a version of this film made in 1931, titled Dangerous Female, directed by Roy Del Ruth. This intrigued me for one reason, it has a nude bathing scene which it was able to get because it was made during the pre-censorship period that was eventually established by the Catholics. Well, guess I’m dirty too.