Older review from my deleted Letterboxd account, all the way back from 2015.

I could have watched fucking Inside Out. I had the gift certificate, I knew it was going to be a good movie. I sure as hell knew it was going to be better than this pile of shit. But I didn’t? Why the hell didn’t I? Well, you know, sometimes you feel the urge to go and watch a movie you know is going to turn out bad, sometimes you want to bitch about something, and sometimes you want other people to hear/read you rant about it. Because knowing I’m entertaining others with my reviews makes me alive again after films like these make me feel dead inside. But it’s also because I have perks from working at a movie theater that allows me to see the occasional film for free, so I can take pride in knowing this movie didn’t make a single penny off of me.

Anyway, I came in expecting this movie to be so God-fucking-awful that there would be a lot to bitch about. I expected this to be Battle Royale II levels of bad. But it’s not, and that pisses me off even more. This movie isn’t good, and it’s not one of the worst pieces of shit out there either, and that leaves me frustrated as a foul mouthed unprofessional critic.

Positives:
* There were a few very small subtle moments in the film that, just for a second, made me think this movie would rise from the muck and end up being decent. Philisophical things like choice, fate, the theme of technology and how it is more calm and calculated than human’s nature of destroying what it doesn’t understand.

* Emilia Clark, the gal who played Sarah Connor. She is scorching hot.

* The last joke of the movie was actually legitimately funny. Assuming you’ve seen the extended cut of T2, you know what Robonegger is like when he tries to smile. Well when he does that, Reese is like, “You know that’s disturbing right?” That made me laugh out loud. 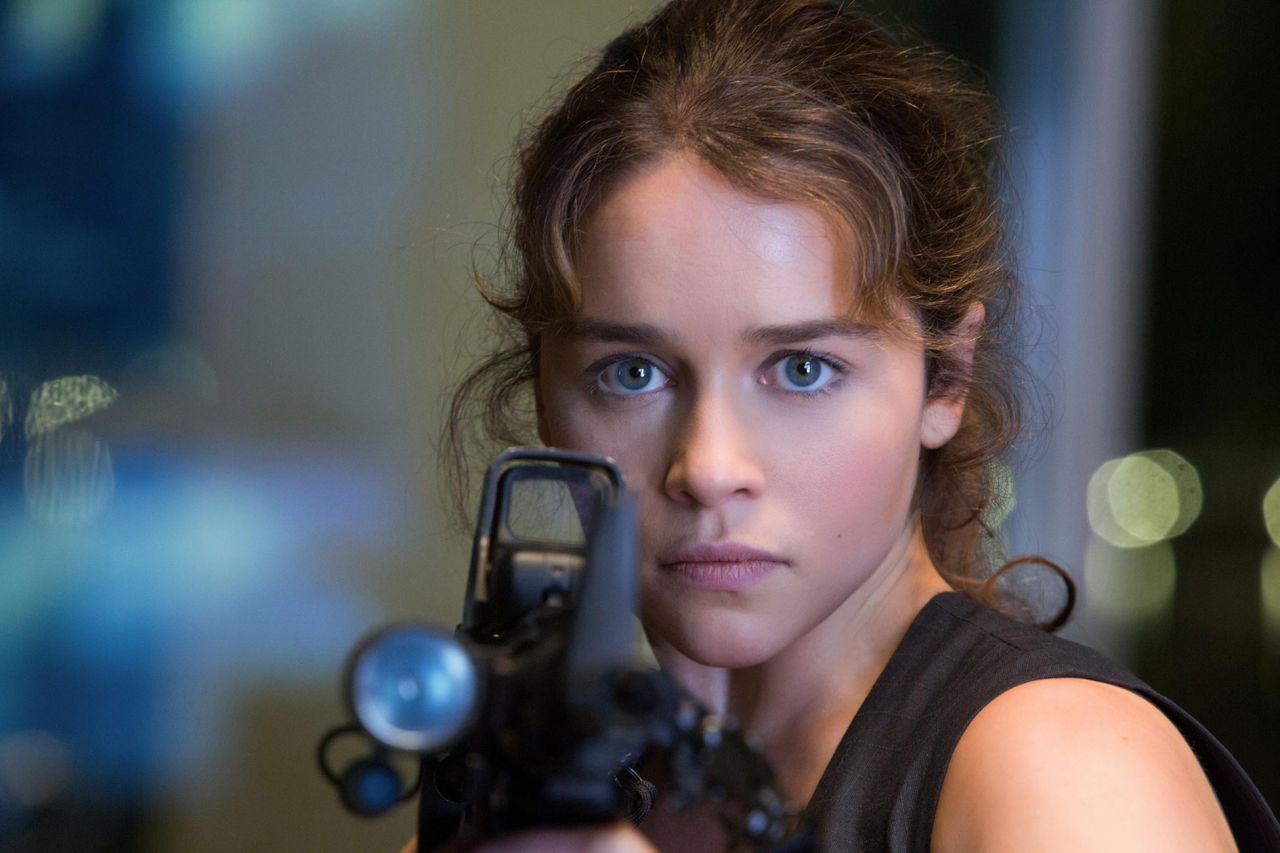 * That thing I mentioned earlier about the potential theme of machine being better than man on an ethical level, very very briefly touched upon by the Genisys (fuck that spelling) kid, is completely blasted through the fucking CGI walls and blown to smithereens by CGI explosions with the way Roboconnor acts. He speaks too much bullshit, he gets angry and pissed off, and causes a lot of death and destruction. That and the fact that the script isn’t intelligent enough to expand upon the potential it briefly touches.

* Emilia Clark, the gal who plays Sarah Connor. I’m sorry, but you’re really bad at portraying the Sarah Connor we all knew and loved from the first 2 films. Her personality is different, and so is the way she acts. And don’t give me any of that different timeline and circumstances bullshit. Sarah Connor wouldn’t act like this anymore than the real John Connor would act like a fucking pussy who gets high from doggy pills and forget that he’s a fucking computer hacker. Smoking hot looks don’t change that. I’d take a mediocre looking woman who can act on the level of a goddess than a woman who has goddess level looks do a mediocre acting job. I blame the script more than her, but the role still demanded a different actress. And for the record, I thought Linda Hamilton was only mediocre looking anyway, so there!

* The main villain is John Connor. Fuck you movie.

* This movie doesn’t slow down. Oh sure, it has moments when the action stops so we can listen to shitty dialogue and see the shitty plot develop, but, Christ man. At least the prior sub-par flicks Terminator 3 and Salvation knew how to pace a film, and knew how to make action sequences stand out. Not one action setpiece stood out in this entire movie. Not one. There wasn’t enough buildup or setup. This movie just wanted climax after climax after climax. Even women want some fucking foreplay between each of those!

* I never was a fan of Jai Courtney, and I sure as fuck ain’t one after this film. He’s no Kyle Reese. Not even close.

* That forced moment with Sarah and young Kyle Reese.

I’m not even going to mention the plot holes and the other lines of dialogue that made me roll my eyes at the film. Bottom line, this film is bad. It’s not even so-bad-it’s-good, which is what I was hoping for. It’s just bad. Nothing stands out about this movie. There’s too much CGI to make me invested in any of the action. The storyline is blech. There is nothing about the film that can make me want to recommend it.

This is easily the worst out of all the Terminator films. I’m serious. Everyone knows the first 2 are masterpieces. The 3rd one at least had some entertaining action sequences, especially that vehicle chase scene. The 4th film, well, it had action sequences that weren’t quite as entertaining as the 3rd, much less the first 2, but they were still entertaining. And it had Christian Bale. But this film did what those Hollywood motherfuckers have been wanting to do since the last film. To kill John Connor and replace him with a terminator. Seriously, go look it up if you don’t believe me. They originally wrote it so that John Connor would become a terminator in the Salvation movie, but fans got rightly pissed off about it, so they changed it. Well they fucking did it. You happy now you corporate cunts?

And James Cameron endorsed this movie. Please for the love of God Cameron, please tell me you only did it to make a few million dollars to finance your next film that will be better than the last flick you made. Please tell me you’re not becoming George Lucas.

This movie didn’t satisfy me. Ranting about it didn’t satisfy me either, because I feel like there’s more to rant about. But this film doesn’t feel worthy of taking more of it. It’s too bland to make me want to remember more about it so I can complain about it all over again. And I’m feeling too out of it to watch another film right now that encourages me to write investing essays about it. So I’m just going to prepare for a walk into the woods (and no that’s not supposed to be some movie reference). Until next time…

Edit: Oh wait, yeah. This movie was fucking pointless. It did the same shit as the 2nd one where they think they may have stopped Skynet and prevented judgement day, but they still felt the urge to go to young Reese at the end and fill his head with informational bullshit that would conveniently explain how Reese knew about all this in the first place, which he wouldn’t need to if judgement day isn’t going to happen the way they said it would, which means they shouldn’t exist anymore in this reality, and, ah, um, the time travel logic in this film sucks! There, now I’m done ranting.

One thought on “Terminator: Genisys (2015) review”