Well, after revisiting Tammy and the T-Rex, I got the urge to revisit these two films as well.

The first one faced a rushed production and low budget in order to quickly get it into theaters prior to the (much deserved) hype Jurassic Park was generating about dinosaurs and dinosaur movies.  They succeed in beating Jurassic Park to the punch, but failed to be anywhere near as successful, or in the ballpark of being as good.  But both ended up being ambitious in their own way, for entirely different reasons.

The ambition is what makes the first Carnosaur flick a bit tragic, as there was plenty of potential in that film that could’ve been far better utilized in the hands of a different director (though the cinematographer, and anyone in charge of the lighting, they deserve a lot of credit for making this film look decent in various scenes in spite of the budget constraints).  The whole plot about a female genetic scientist gone mad with the idea that humanity is causing the destruction of the Earth, and must thus purge humanity from the planet by bringing back those the world rightfully belongs to.  Dinosaurs.  Or in this case, primarily raptors (I’m assuming that’s what the main creature in the film is).  It all winds up with a film that contains commentary on government/corporation and their lack of concern for the common citizen (how they are just a means to an end); how green peace hippies are misguided and helpless before any true threat to their existence and way of life; how blue collar workers are having their way of life threatened and may find themselves going extinct like the dinosaurs of the past.  The film paints a very nihilistic picture of nature and humanity.

Making it even more topical is the disease the mad scientist creates, which has the symptoms of a harsh fever, which affects both men and women, but affects women in a more harsh manner.  The disease causes women to become pregnant with a dinosaur egg, which causes the woman’s death once they give birth to it (in whatever fashion).  It’s a bit vague on how the disease spreads, but it’s indicated it primarily spreads through chickens and their eggs.  I imagine it’s contagious once you get it.  It becomes plot-relevant as to why things happen this way.  It’s a way to eliminate the female population so that the males can’t reproduce, assuming they would survive the new population of raptors that come into being as a result.

Similar to Dr. Strangelove, the corporation/government entity comes up with a plan to get through all this.  Even prior to the genetic engineering dino disaster, there were plans for creating more durable and longer lasting food supplies (what you eat is another theme in this film).  Near the end of the film, they have a plan to counter the mad scientist’s schemes by having males begin re-population via these artificial wombs that are more or less in the testing stage.  Rich and powerful corporations, for all their menace, are the most adaptable things in the world.  Which means they don’t hesitate when implementing containment protocols.  So they start quarantining and executing anyone and everyone who is infected or in an infection zone.  Which inadvertently leads to the destruction of a potential cure for the virus.  Something that could’ve been possible if there was more communication and cooperation.

That all said, the main actor in this doesn’t have the acting chops to convey such manner of communication.  I’m not entirely sure if he’s to blame, or if it’s the director, but he has some of the most awkward and baffling reactions to seeing dinosaurs and seeing people dead or getting killed.  His reaction primarily consists of getting angry and slamming his hand against something.  I don’t get it. 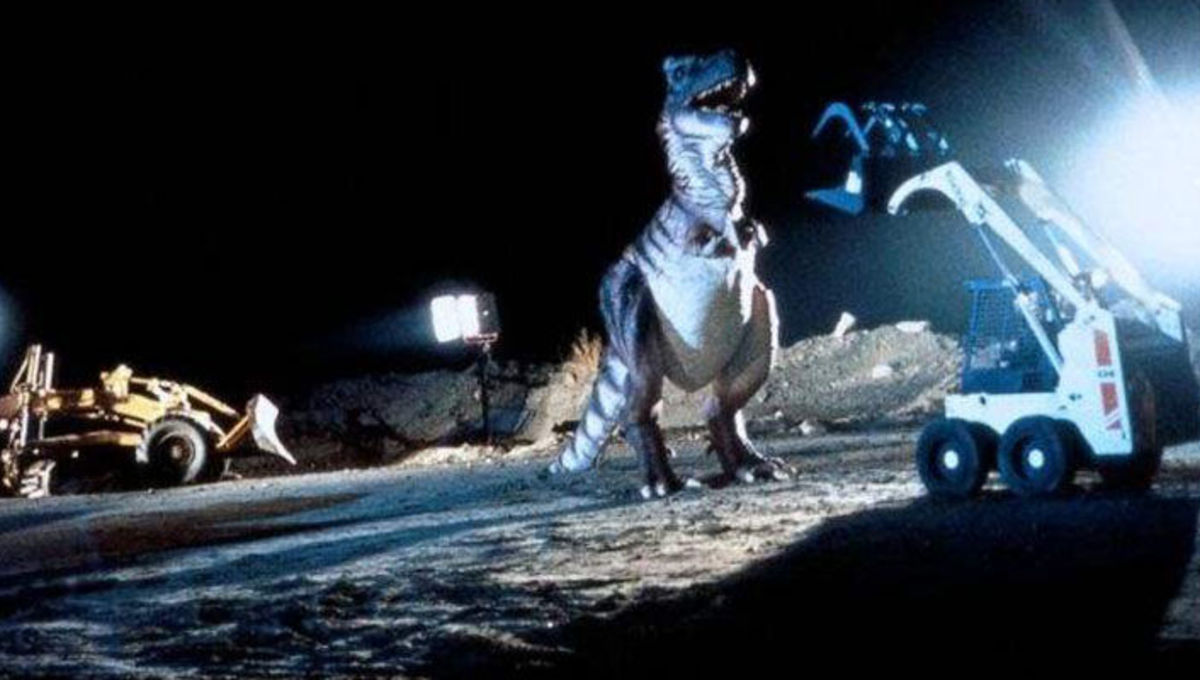 Surprisingly enough, to the film’s credit, it also takes on a more somber tone whenever one of the major dinos gets killed.  The music becomes sad, and we linger on their suffering for a bit.  As if it’s always a tragedy when a species has to die off or something.  It works with creating a parallel between the dinosaurs and humanity.  Both can be vicious and brutal, both have a will to survive, neither fully capable of adapting to the things that threaten their existence.  Another parallel can be seen with how the raptor rips apart its human victims, and then we later see the blue collar worker utilizing a tractor to rip apart the T-Rex in a similar fashion.

Like I said, this had all the potential to be great, but it ended up being unfortunate enough to wind up in the hands of Roger Corman, who usually prefers settling with schlocky B movies on a good day.  Because of that, there’s some pacing issues, the action/horror scenes aren’t done as well as they should have been, the special effects are in need of an upgrade, the actors are a mixed bag, and the music mostly sucks.  Regardless, what hindered potential there is still makes it a worthwhile watch.

Edit: Oh, that’s right.  I also read the novel this film is based on.  How close did the film adhere to the novel?  Not at all, raptors and a t-rex aside.  There was some plot about a mad scientist wanting dinosaurs to take over the world, but it was a dude, and he didn’t create any disease that gave people the fever and give birth to dinos.  Nothing about chickens and eggs either.  A raptor gets loose, kills some people, gets captured by people who work for the mad scientist, and an asshole reporter tries to uncover the whole thing by having sex with the mad scientist’s wife who is a nymphomaniac.  In fact, getting laid and being in heat is a common theme across the novel.  The novel… is just ok.  It’s entertaining enough, would make for a decent B movie, but it’s nothing I would call exceptional (and it really slows down in the middle).  Honestly, I liked the plot of the movie better.

First of all, the raptors look much better in this movie.

That all said, on the surface, this film is nowhere near as ambitious as its predecessor which it has nothing in common with other than having raptors and a T-Rex in it.  As in this film doesn’t acknowledge or continue the plot of the first film.  Which I guess means the containment worked and everything is ok, until raptor eggs show up out of fucking nowhere at a plant.  I mean, there’s sort of an explanation for it, but not really.  They’re just there so that it can be confirmed this is a shameless rip-off of Aliens.  Seriously, everything about this film rips that movie off, even from the director’s cut.  Raptors slaughter everyone but the kid at this place, a team of specialists come in to find out what went wrong, they find the kid, then they get ambushed by raptors, then a raptor spontaneously teleports into a helicopter to kill the pilot and cause it to crash, forcing the specialists and the kid to try and hold out, until they’re forced to leave when the raptors begin another assault, some other bullshit, and then a finale with a mechanical loader facing off against the Queen T-Rex.

There is nothing original about this film at all, and everything it did Aliens did better.  So what’s the point in watching this other than seeing more dinosaurs (which, in all fairness, do look better than in the first movie) killing people?  Well, only a couple kills look good, the rest are just sort of meh (and cut away too quickly).  The lines are on the laughable side, though there is one that I had to do a triple take on to make sure I heard it right.  So you know that scene in Aliens after their spacecraft crashes and blows up where Hudson is all, “Game over man!”  Well, this film didn’t have anything to rival that memorable line delivery.  So instead it opts for this line:

“What are we going to do, breathe?” 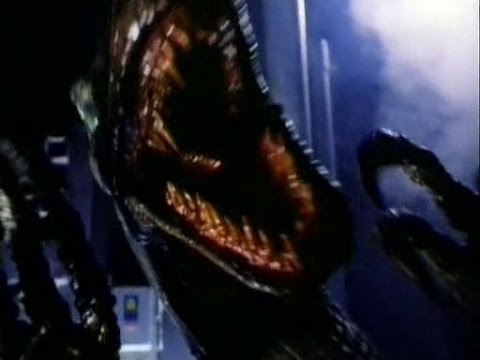 I had to put on the subtitles to make sure I heard that right.  Like, maybe he said “breed” instead of “breathe”, which would still baffle the shit out of me.  It was a no win situation.  I just can’t fathom that line of dialogue.  What are we going to do, hold our breathe?  Start breeding and breathing heavier and faster?  I don’t know, maybe it’s just a way in which that movie is bitching about how unrealistic it is that the space marines and Ripley and Newt would be breathing in that area of the planet they were on or something.

And honestly, that line of thinking probably isn’t far off from this film’s intentions.  This isn’t a film that merely wants to settle for shamelessly ripping off Aliens.  Oh no.  It wants to shamelessly rip off Aliens, and insult both it and Terminator and James Cameron all that the same time.  Seriously, this film becomes so much more fun to watch (especially if you make a drinking game out of this) when you count all the ways this film says “fuck you” to James Cameron films.  But it does so in a nice ball-busting way, but is less nice about it when it comes to fucking over the women and enforcing male domination (unless you’re black).  Here’s some examples:

This film is a lot more fun if you watch it with that sort of attitude.  Because other than that, as far as rip-offs go, it’s not too bad for schlocky C-grade quality that strives to be B-grade (did that better than the first Carnosaur at least).