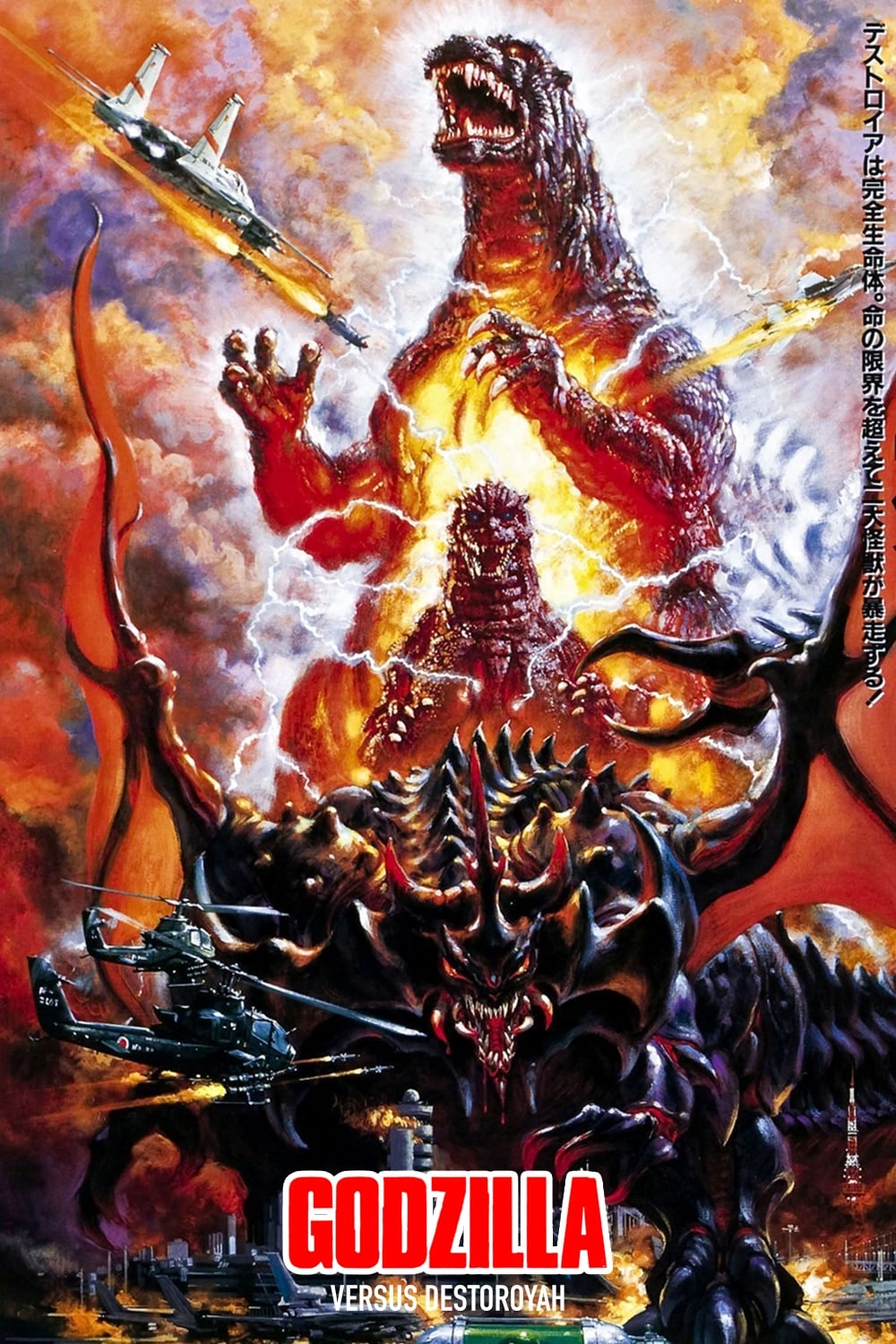 “I’ve a feeling this is going to be Godzilla’s last fight.”

This is it folks.  The final film in the Heisei era Godzilla films.  And it’s currently my favorite Godzilla film ever.  Yep, even compared to the original.  That being said, my taste in films is a bit simplistic and shallow when it comes to entertainment value, so take it with a grain of salt.

First it starts out with a great callback to the 1954 Godzilla film, with the sound of Godzilla’s roar, the sound of stomping, and the screen goes from black to a pan over the sea. When he first shows up near an airplane, the pilot says, “Watch out, it’s a monster!” Come on, like you guys don’t have any idea who that is, I don’t care if this location is in China.  Yeah, that’s right, this film begins with Godzilla attacking China.  Well, that was inevitable. 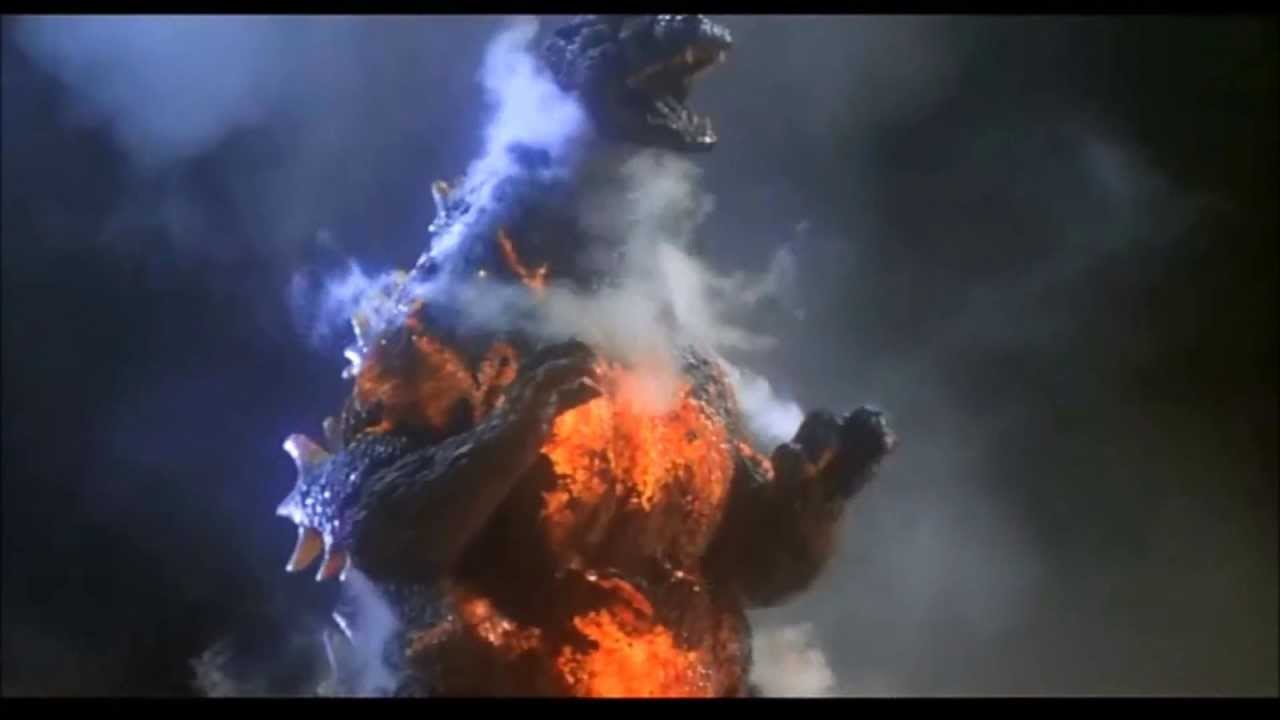 But Godzilla has something different about him. He’s glowing red all around his body. Apparently, he’s beginning to overheat due to his heart, which is like a nuclear reactor, and his going out of control. If his temperature rises high enough, he will meltdown and possibly destroy the world due to the heat he emits. So I guess the stakes are high for the humans to be useful in this film.

And this is one of the primary reasons I despise the 2019 American film.  It completely rips off this image of Godzilla, and commits sacrilege with how they treat it.  And that’s the last I’ll mention of that film.

There is another problem. A scientist, studying the soil retrieved from the site where the oxygen destroyer was used against the Godzilla from the 50s (nice continuity and callback to the original film that started this all), who also plans on making an oxygen-based technology, discovers a lifeform from the sample. Turns out that it’s a creature thousands or millions of years old, that has now evolved due to the oxygen destroyer weapon, and has now broken free and multiplied. These creatures are growing at an accelerated rate.

So the military manages to get their butts in gear and send an army into the building the monsters have moved into, and it becomes pretty obvious during this scene that they’re ripping off Aliens. The guns they hold, the way the soldiers move, motion trackers, an industrial setting (though one not covered in slime), creatures that have an extendable mouth within a mouth; it’s difficult to ignore the similarities. It’s not as good as Aliens, obviously, but it’s still a bit entertaining. The soldiers even manage to kill a few.

And of course there has to be a dumb broad in this movie. Instead of running away with everyone else, she tries to hide. Then she hides inside a car. Then she takes a peek and opens the car door. And you can guess what happens next. This lady deserves to die from her stupidity, but of course she doesn’t. 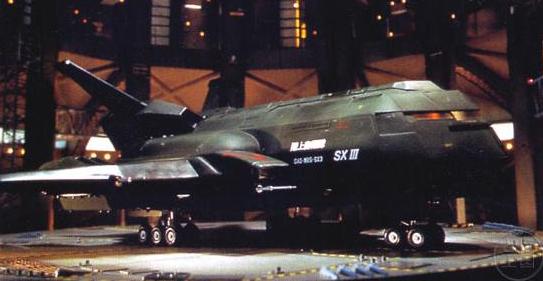 Oh my God, they did it! They fucking did it! They have a Super X3 in this movie! It took 5 movies after Biollante, and I don’t count the Space Godzilla movie because they didn’t call that machine Super X (it’s Mecha Woody Woodpecker), but they did it! How will this one fare? Will it have awesome superhero music? In response to the latter, sort of. It’s nowhere near as catchy or good as the 1984 film, but it’s not bad. What it does have is weapons that aren’t explosive, but can freeze shit.  And it actually manages to freeze and cooldown Godzilla to prolong the inevitable explosive meltdown.

What’s this? Miki’s psychic powers are fading? Well good. I think they’ve done all they could with the psychic angle at this point. They bombed their last decent shot of it in the previous film, so time to move on. Also, she doesn’t seem to have a crush on Godzilla now. She now has a crush on Godzilla Jr. 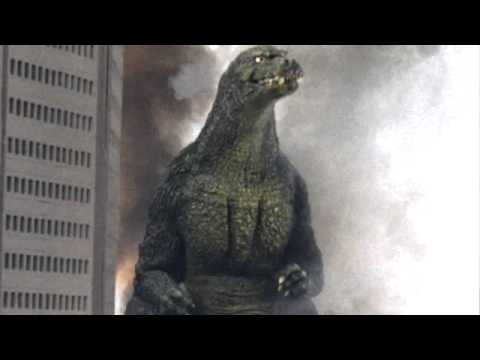 Godzilla Jr. shows up, and finally, he looks like a mini Godzilla. He has grown enough to be considered a teenager, I guess. It kills me that that the military general, after finding out that Godzilla has melted the ice and travels towards Jr., asks if it’s even possible for Godzilla to sense and follow Jr. Just what the hell did you think he was doing in Mechagodzilla II, dumbass!? You should know, you were there! You were even involved in a similar plan in that film!  One of those instances where the continuity kinda bites the film in the ass.

Back to the military fighting these monsters, they seem to be doing a pretty good job at keeping them contained. They even bring in the ice beams to take the creatures out. Unfortunately, the creatures morph together and become one giant creature, Destroyah (aka Destroyer). When the military fails to destroy the destroyer (hahah), and find out that Godzilla’s temperature is rising again with the meltdown still inevitable, they decide it’s a good idea to let Destroyer and Godzilla fight. And they’re actually rooting for Destroyer, though I don’t blame them. They believe that Destroyer is the only thing that can destroy Godzilla to prevent the meltdown. To get them to fight, they use Miki and another psychic to influence Godzilla Jr. to move into the Japan mainland, where Destroyer is. And this is when the epic battle begins.

WARNING!!! MASSIVE SPOILERS FOLLOW! SKIP THIS WHOLE SECTION UNTIL YOU’VE SEEN THE MOVIE!!!  TAKE MY WORD FOR IT, IT’S WORTH IT!!!

Godzilla Jr. vs. Destroyer. After nearly getting killed, Jr. actually manages to hold his own and beat Destroyer. He’s learned how to fight, and has officially become the best and most worthy version of Godzilla’s son in any of the Godzilla series to this day (seriously, no other film with a Godzilla Jr. in it comes even remotely close to how this film portrays a mini Godzilla). Godzilla and Jr. meet up with each other, and then Destroyer mutates into his ultimate form. And man, what an entrance he makes. He looks like a Demon Bat from hell with his entrance. It’s a hell of a site, giving Godzilla a run for his money with his entrances in the Biollante and Mothra films. Destroyah flies in, carries off Jr. (able to hold him in just one hand), drops him from a very tall height, and kills Jr.  Jesus, this just got sad.

Godzilla is obviously pissed, and now takes on Destroyah. Destroyah manages to keep getting the upper hand over Godzilla, and Godzilla’s temperature keeps rising as the fight goes on, steam pouring out of his body, continually getting closer to meltdown level, making the fight get more desperate as it goes on. It even gets to the point where Godzilla’s spikes start to melt in the middle of the fight. And this increased temperature also makes Godzilla’s blasts much more powerful than before, causing the tide to turn in the battle. His beam blast gets so powerful it causes the ground to ignite into an out of control firestorm, without even touching it.  And everything within a half mile vicinity of him spontaneously combusts.  It’s freaking epic.

It’s ultimately the military that deals the final blow to Destroyah, even though Godzilla could’ve easily finished it off. And then they begin freezing Godzilla just as the meltdown begins, minimizing its effect so that it doesn’t harm the planet. And, man, we actually see Godzilla melt and dissolve before our eyes. Christ, now this got really sad. The radioactivity begins to spread, but then it disappears, as if something absorbed it. In the midst of the destruction, mist, and fog, stands Junior, rejuvenated from the radioactivity he just absorbed, now standing as the new Godzilla. 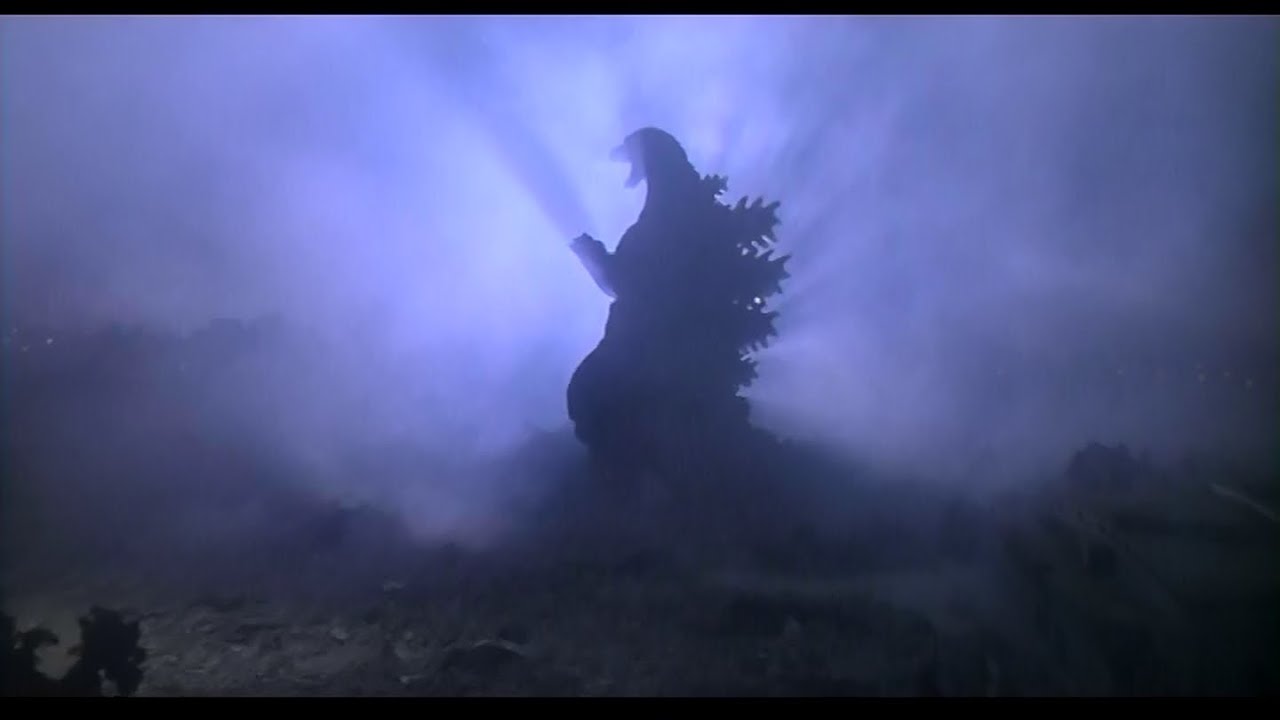 And that’s how it ends, though it’s worth noting there is an extended finale that was deleted from the film, showing that Destroyah wasn’t killed by the military, survived the fall, and then got pummeled to death by Godzilla afterwards.  Honestly, I actually prefer what they went with in the final cut of the movie.  It shows that the military finally evolved into a significant fighting force at this point that can make a difference in a Kaiju conflict.  It ends up acting as a sort of passing of the torch in a way, where they become capable of defending themselves against other kaiju and not just relying soley on Godzilla.  Then again, this idea is a bit far-fetched considering they did play a role in victory in the other previous films.  It just wasn’t as significant as in this one, when the stakes were so high (previously it was all about “we must win or Japan will be destroyed!” then it became “we must win or the world will be destroyed!”).

This film was awesome. Despite some cheesy lines and cheesy elements in the story, I was hooked on it every second of the way. The only major problem I had with this movie was the scene where the newswoman was being stalked by a small Destroyah.

The plot was good, the last half was every bit as epic as I’d hoped it would be for Godzilla’s final film (in the Heisei series at least), and it had emotion not felt since the Mechagodzilla II film. This is easily the most solid and emotional film in the whole series, not only the best in the Heisei, but arguably the best out of all the Godzilla films, next to the original of course. Plus it made some pretty good callbacks to the original, from the first few seconds in the movie, to the plot tie in to the oxygen destroyer from the first film, to the end credits that show images from the original film, and all the Heisei series films. That is, if you see that version of the movie. The Tristar DVD release fucked things up with the end credits and only showed scenes from the 1950s film at the end, which makes it seem a bit random. See the version of the film that contains the entire end credits sequence. Is it necessary? No, but it adds more to the movie, and makes it clear that this is the end of a legacy.

This movie is a must see. The entire Heisei series is worth watching just to get to this one film, especially for its last insanely epic half.  It seems strange to me that Destroyah isn’t one of Godzilla’s better known and more famous foe’s.  Then again, that makes the film more special, having a stand-alone and worthy foe in it.  Wouldn’t surprise me if some sequel/remake/reboot came along taking up this character again (or even Biollante) to utilize them in some lesser format.  Because the Heisei films brought out the best in Godzilla and the other Kaiju monsters, both old and new.