This review is an older one from Letterboxd before they deleted my account.  Figure today is as good a day as any to post it.

I must confess, I’ve only ever seen 2 Friday the 13th movies. I saw the 1st one a long time ago, when I was, like, 13 years old or something, so I don’t remember much. The other was the 4th or 5th film, I think. I don’t remember exactly, but I saw that one less than a year ago in a special setting.

But I’m not just going to watch each and every single one of these films normally. Fuck that. I’m watching them blasted. My attention span will be greater, I’ll be more focused, and I’ll be able to not only withstand the stupidity I know I’m going to be in for, but I will also be able to address it. Of course, these films might drive me into getting so mad and raging drunk that I will stop giving a shit, but I’ll have fun either way. Plus the fridge is has too many beers in it after a slight shopping incident, and someone’s gotta drink it to make room for groceries.

And lastly, the main focus of this endeavor will be comparing Jason’s. As in comparing the actors who played Jason, which ones did better, which one’s did worse, what their mannerisms are, their movements, etc. Kane Hodder pointed out the significance of this in an interview, how important it is for an actor to capture that intimidation, that raw force, that brutality and intensity of the kills, and so on. Because he’s doing motion capture for the game, and bashing the shit out of stunt people playing the camp counselors in the game, this will be a significant area of focus. Plus I will also get familiar with the lore.

So, what better way to start off studying Jason than with the first Friday the 13th movie, which Jason isn’t really in. ON WITH THE FUCKING SHOW!!!

Hallelujah and fornication. You know, I have to wonder, how often does this happen in real life? Camp councilors fucking each other I mean, not camp councilors getting killed.

Considering the screaming, someone must have heard that, found the killer, called the cops, and arrested him/her.

Interesting special effect of having the title smash through glass. Why the fuck isn’t Stone Cold Steve Austin music playing!? Oh yeah, he wasn’t around back then.

Friday, June 13, the present. You know, I always preferred films that don’t specify a date, they just say “The Present” “The Past” “The Future”. But on the other hand, that would make future predictions like with Back To The Future Part 2 less interesting. Anyway, so 22 years later. If the killer is still alive, he/she must be at least 50 years old. I’m guessing, since the camp people that got knifed acted like they were in a bit of trouble with a superior.

Holy crap. You see this big black motherfucker in the shop? He should be a bouncer. Fuck that, he should be an MMA fighter.

Guess Camp Crystal Lake is still a sore subject for the townspeaple 22 years later. Ah, it’s been closed since then, until now. Dun dun dunn!

Annie, what a nose you have.

“All the girls up there going to look as good as you?”
Eh, I hope they look better.

Cliche’d old crazy fuck saying, “You’re all going to die, that place is cursed.” There’s a reason those annoying fucks are parodied in so many movies nowadays, and during the last decade or so. Why the fuck aren’t those characters ever killed off? Weird bicycle riding leroy ass digging son of a bitch.

Is there some hidden meaning to an oil driver in a red oil truck? b

What the fuck!? How did they not catch the asshole/bitch who did the killing in ’58? They must have been singing too much Hallelujah while people were getting killed with God not giving a shit for the sinner sinner sinner, descreation, sinnar sinnar sinnar! Judas Priest!

And water was bad.

POV cam. I wonder if some of these characters and speeches were cliches back then? Probably not.

She’s dropped off in front of a cemetery.

Oh no, eukalayley music. Sex crazed guys sandwitching a sexy girl while driving a truck, which is also red. Enough with the bloody trucks!

Screaming Indian Totem Pole. 70s mustache guy with glasses chopping wood, wearing red socks and short 80s shorts that may or may not indicate he’s gay. In that decade, you can’t be sure of their sexual preference.

Ahh, I’m liking this setting and the sounds of the birds and owls. Brings back good camping memories.

70s mustacheo admiring drawings, of himself, drawn by a girl, who draws stuff. And he starts flirting with her. Ahhh, they have a history together.

More POV cam. Is Annie or Ashley the main character?

Ah, archery targets. Nice to see a camp that–
Fuck me! What kind of a duck, I mean dick, shoots an arrows that close to a woman who is still setting the target!? I hope he gets impaled by an arrow later!

Oh shit, Annie is getting a ride to Camp Crystal Lake by a driver of a Jeep who’s identity remains secret. We all know what that means. She’s not the main character.

Mail me. Passed the road. Death Proof scare. Black pants, light black boots. Hah, the face expression she makes when her throat gets slit. It’s like, “Eewww! There’s blood on me!”

Hah! The CPR->kiss trick before The Sandlot did it!

You don’t act like a crazy Indian towards a police officer. Racism only works one way with them. They can call you Tanto, you shut the fuck up with those humorless fucks. “We ain’t gonna stand for no weirdness out here.” Fuck da police!

How did that crazy loony fuck Ralph get there so quickly? He must’ve walked 20 miles on his own. Oh, my apologies, road 20 miles on a bicycle. Fuck you Ralph!

Strip Monopoly? That would be the only thing that would convince me to play that game. Though personally, I prefer Titty Grab.

Well, that’s one way to unsettle my gut, showing a dead guy above the area where two people are fucking.

Well, that’s a disturbing way for Kevin Bacon to go. Spear through the throat, or whatever that was. Arrow?

Bullshit. Fuck the storm for interrupting the game and causing that girl to quit.

Why are these Diners run by old ugly bags? Why aren’t these old bags the ones getting butchered at the camp instead of the hot chicks? Fuck slasher film’s hatred of hot chicks who get laid by hot guys. They’re probably written/directed by 50 year old virgins who wish they got laid but never did.

That yellow rain jacket reminds me of April O’neal. If only the turtles would show up and kick the killer’s ass. Unless O’neal is played by Megan Fox.

Guess that girl was onto something about her dream regarding rain and blood. As if that foreshadowing wasn’t obvious. Slayer music should be playing.

Someone yelling, “Help me!” I sense a trap. Out in the rain and woods alone during a storm? Yeah, you’re fucked. Saying “Hello?” during a storm trying to find someone. Kinda wish they were shouting it like this:

Well goddamnit, I wanted the nerdy guy to get arrowed, not the dike.

Just 3 people left, including Mr. 70s Mustacheo on his way back to the camp.

They find an axe in the bed with a small amount of blood on it.

So the killer had time to move all the bodies and clean up the blood. Well, so far, not as far fetched as that fucking movie Identity.

More rapes and robberies and murders and everything during a full moon.

Figured 70s Mustacheo would get it. Knife to the guy, I assume. Generator sabotage.

Only 1 person left, and it’s Ashley. Big surprise. This movie is kinda boring, considering how predictable it is. Not doing much with the Jason lore, or the kills, or any storyline pr characters in general. 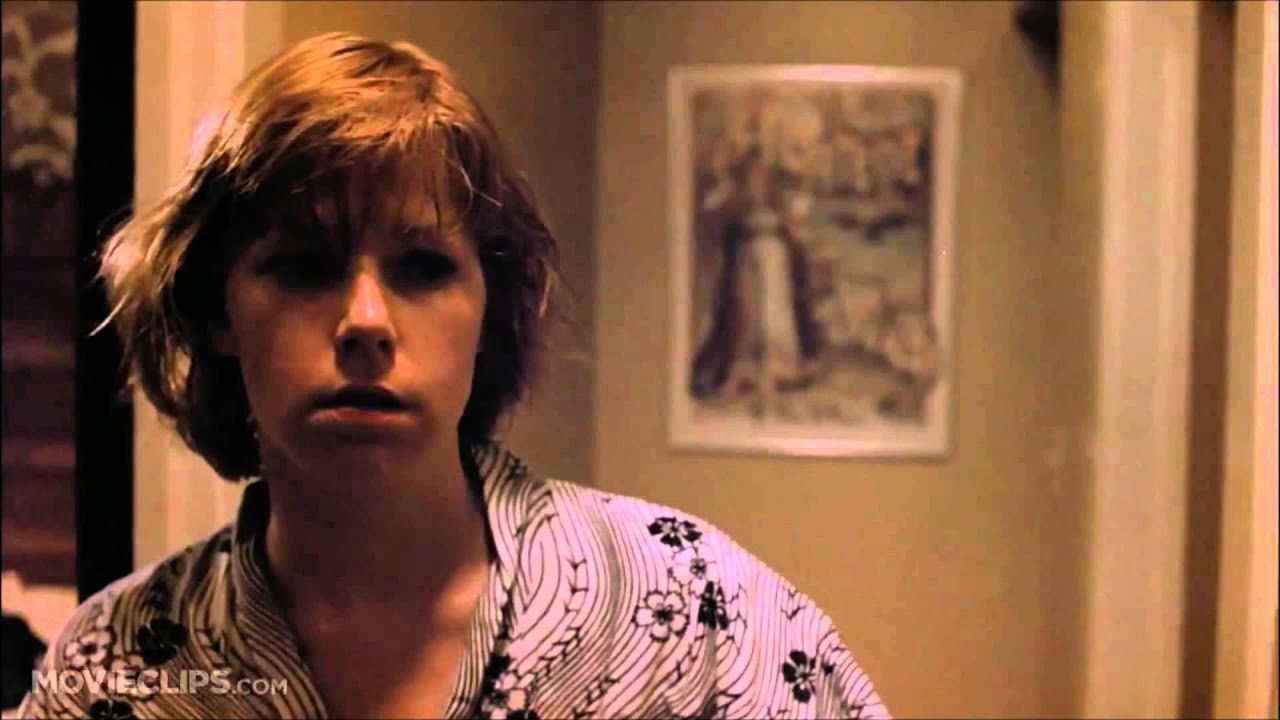 Bill is the one who got impaled by arrows? What the heck? What about that other girl?

Nice job barricading the door. Won’t work if the killer decides to smash through a window though. Like that dead body that got tossed in. Acting so bad even a dead body can’t act dead.

How pathetic, jacket getting caught on oven door.

Mrs. Royce shows up. Well, she’s the killer. Mostly say that because I’ve seen the movie before, but it’s the only possible conclusion considering how late in the movie this character shows up without introduction earlier. She used to work for the Christies. Who are the Christies? The original camp owners?

Bad acting? Or killer trying to act innocent? Or both?

Young boy Jason drowned while camp councilors had sex, back in the 50s. Jason is the son of Mrs. Royce, and June 13th is his birthday.

So this old crazy bitch is killing campers and setting fires in the past because she blames all camp leaders for the death of her son, because she’s insane. Eh, typical B movie plot.

Hey, Ashley’s got a gun. Too bad her name ain’t Jane. And she loses the gun immediately. Is Mr.s Royce going to bitch slap her to death? Holy crap! Ashley hit Royce in the cunt and shoved her away! Awesome!

It always irritated me how the last woman alive somehow has an advantage over the killer none of the other victims ever had, supposedly.

Hiding in a closet while noises are happening just outside it, and seeing a shadow moving nearby. That should be an element in the game, like in Haunting Grounds.

Alright, you knocked her out, now finish her. Or walk away. You fucking idiot!

Fight on the lake shore. Really? This old bad managed to kill all the others? And Kevin Bacon? This is a load of bullshit. She seems pathetic in these fights with the last survivor. Oh well, nice decapitation kill. Boat ride onto the lake at night, for some reason. Guess it’s safer than being on the land with those who are dead.

Cops arrive in the morning. Oh snap, the undead drowned boy Jason is still alive! Or is he? How did Ashley arrive in the hospital after that? Was it a hallucination? 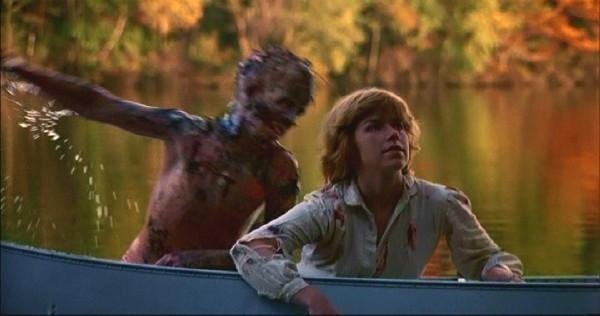 “Is anyone else alive? Are they all dead?”
“Yes mam.”
Hah! I love having this guy being so blunt about it. Not enough movies do that.

“Then he’s still there.”
Ominous ending, leaving it open for a sequel if the film ends up successful enough. Well apparently, it was successful enough, because they made a shitload of sequels.

In the credits, Mrs. Royce is called Mrs. Voorhees. I guess the girl’s name is Alice, not Ashley. My bad. 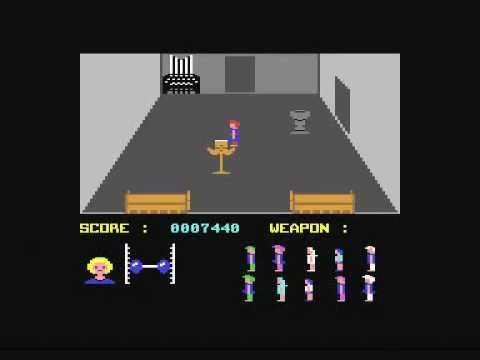 This movie isn’t that great. I’m not sure why this turned into a franchise based off of this movie alone. Well, maybe the sequel has something more to it than this film that got this franchise such fame.