I’ve been drained of energy lately. The election has me all depressed. It’s not who won that has me depressed, it’s seeing all the reactions to who won that’s got me depressed. Every single goddamn talk show is spewing bitchiness, bitterness, and hatred over the winner. People are rioting in the streets. Not that many are acting like reasonable adults. That has me down more than anything else, and it’s stupid. So nothing like a couple films that actually turned out pretty decent to cheer me up and give me something else to talk about. I didn’t have it in me to write enough about each film to make a satisfying blog entry (satisfying by my standards, it’s difficult to pleasure myself), so I’m going for a double decker sandwich.

Yeah it’s a bit corny at times, but I think the film acknowledges that.

Very bloody, gory, brutal war film. And I liked it.

I don’t think I’ve ever seen a battle sequence like the one that shows up at the start of the second half of this film that shows warfare in it’s most unrelenting overwhelming yet realistic amount of violence. Closest I’ve seen is Saving Private Ryan, Black Hawk Down, and We Were Soldiers. Would’ve been nice to see them reload their guns more often though.

I was actually into both halves of the movie, even the first one. Hollywood tropes and cliches or not, damnit, I found the first half enjoyable. Smiling at the cheesiness, of Doss being unable to take his eyes off of the nurse, of seeing their relationship develop, of the soldiers in the camp. I loved it all.

And the battle that erupts during the second half, holy shit. It’s fucking gnarly! Legs/arms/heads and shoulders knees and toes, knees and toes, they were all getting blown off, burned, stabbed, shot, and the film didn’t shy away from any of it. There was one moment the camera did seem to shy away from, with the Japanese soldiers slitting this guys throat with a sword. It made me wonder if that was intended to be edited that way, or if that was the one thing out of everything else the MPAA decided to bitch about.

I’m thinking the first half was all petals and roses intentionally, to put the viewer off-guard. To put Doss off-guard. Things seem fine, joining the war does seem like a good thing to get into, despite the father’s warnings. But once you get in there, all of a sudden the world changes. The best line to foreshadow just how terrible warfare can be is given by Hugo Weaving. I can’t remember it exactly, but it went something like this: “You may believe that God is going to help you in all things. But if you do manage to survive the war, you won’t believe that anymore.” Because war is hell, and he knows it. And once the 2nd half gets into action, no one will question that.

Very good inspiring story. Knowing the number of men he saved at the end will hold you in amazement. Highly recommended movie. 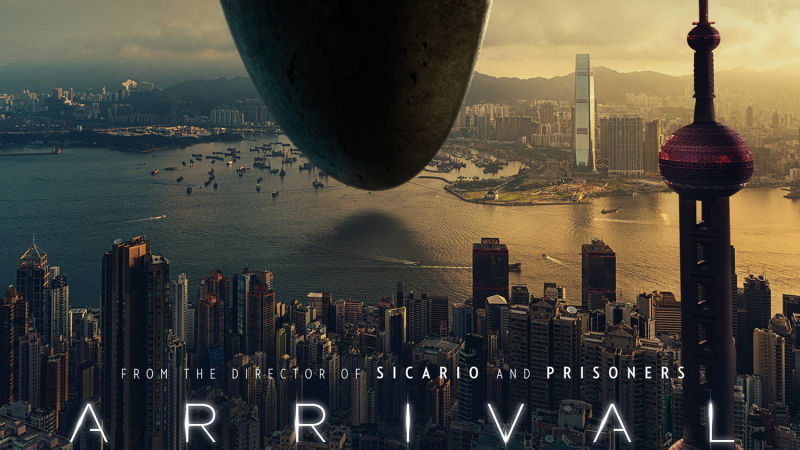 Continue reading at your own risk. See image literally an inch above this sentence.

EVERYONE DIES AT THE END!

Just kidding. Just wanted to be double sure readers know what the stakes are if they haven’t seen this and decide to read this review anyway.

The movie certainly kept me invested, though it could’ve benefitted from being on a higher quality theater screen. Special effects were great, the language communication angle was awesome. The theory of people’s line of thinking and personality being shaped by the language they use is interesting, but I think they took that too far.

I mean seriously, learning the frikkin language allows you to think like the Mass Effect Reapers and go all Slaughterhouse Five? I find that far fetched. I also saw that ending twist coming when the film was halfway over. I picked up on the hint early on with the intro dialogue about concepts of time. I also picked up the hint on, “I’m the world’s best scientist,” and on the flash forward bit with, “Why don’t you ask dad, he’s the scientist.” And then the finale just drags on and on shoving this twist in your face like, “See? Isn’t this a smart twist? Aren’t we a smart movie? The Usual Suspects ain’t got nothing on us!”

So first we see that she’s flash forwarding at the very beginning of the movie (with the implication being that it was a flash-back the first time you watch that scene). Don’t remember any alien contact at that point. Does being a language genius without encountering alien language make you Slaughterhouse Fivey in an amateur way? I call bullshit.

Second, if one does have this ability, couldn’t they alter the future if they possess the ability to know about it at all times? Couldn’t they act on something in the present to change the future? Closest they get to that is with the Chinaman, but that’s one of those Terminator-esque self-fulfilling prophecies. That doesn’t count!

Despite all that, the film held my interest the whole way through (though I really wish they shortened the ending and stop shoving the fucking obvious in my face). The aliens were cool, the spaceship was cool, the interaction between the nations was cool, the analysis of the alien language and building up communication was cool. It’s also nice to see other characters besides the main protagonist make breakthroughs and progress so that the entire thing doesn’t always just revolve around her. Special effects were top notch. Each sequence where gravity changes when they come onto the ship (or in one instance nearly get blown out of it) is outstanding. And it has a nice message on how communication can be both a weapon to destroy humanity, or humanity’s salvation. We just need to talk and learn how to understand each other and get along.

Amy Adams was great, Jeremy Renner was ok (I keep hoping he has untapped potential, but I never really see it; I think he’s just destined to be a B movie action hero), and the film itself could’ve been better. But it’s solid enough to earn a 3 star rating from me. I still think Hell or High Water is the best film I’ve seen all year.