So I’m going to do something a little different.  Rather than review an entire series, or an entire season of a show, I’m going to do an episode review.  Besides, when it comes to a show like the Simpsons, most die-hard fans will agree that this show has been dying a slow death since season 8 (season 9 at the latest).  Me, personally, I’m not all that interested in much beyond Season 8.  In addition, I don’t believe there’s a show in existence, or has existed, that has maintained high quality that goes beyond 8 seasons.  Best you can hope for is it having ups and downs during its existence.  What you should expect is either a Bell Curve (where the tip on the far left; take that as a political pun if you will), or a downward slope moving steadily down to the right until it meets a bitter end.

I’ve thought about doing a review like this for a while, what with some episodes of Babylon 5 I’ve been rewatching (maybe next time I go through that series).  But at the same time, I don’t want this site to get bogged down with episodic reviews of shows.  Don’t expect this to be a regular thing.  I’ll only do this if I think an episode has something really good to say, and/or is very relevant to today.

So the episode is about Marge getting outraged at the violent antics of the cartoon show Ithy & Scratchy, which is basically like Loony Tunes, but with the violence ramped up a notch.  She becomes concerned when Maggie, the little baby whose always sucking on a pacifier (a sound that has become as associated with her character as breathing through a mask is associated with Darth Vader) and tripping over herself, gets influenced from what she sees on the television.  By hitting her dad on the head with a mallet.  It’s foreshadowed how much influence the television has on her via a previous episode where Bart and Lisa argue about Maggie loving one of them more than the other, and when they ask her to come over to the one she loves the most, she goes over to the television and gives it a hug.

Marge forbids the children from watching these violent cartoons ever again, which causes Bart and Lisa to do what is only natural.  Sneak over to a friends house and watch the show over there.  I saw where the show was going with this whole angle, an episode that has something to say about television violence negatively influencing the youth, but also showing the downsides of censorship for the sake of the children.  But I new I had to review this thing when this dialogue exchange came up:

Lisa: “But mom, if you take our cartoons away, we’ll grow up without a sense of humor and be robots.”

Bart: “Robots?  What kind of robots?”

At that point, I knew there was something extra special about this episode.  It’s almost like it predicted the rise of NPC culture the same way it predicted Trump’s presidency. 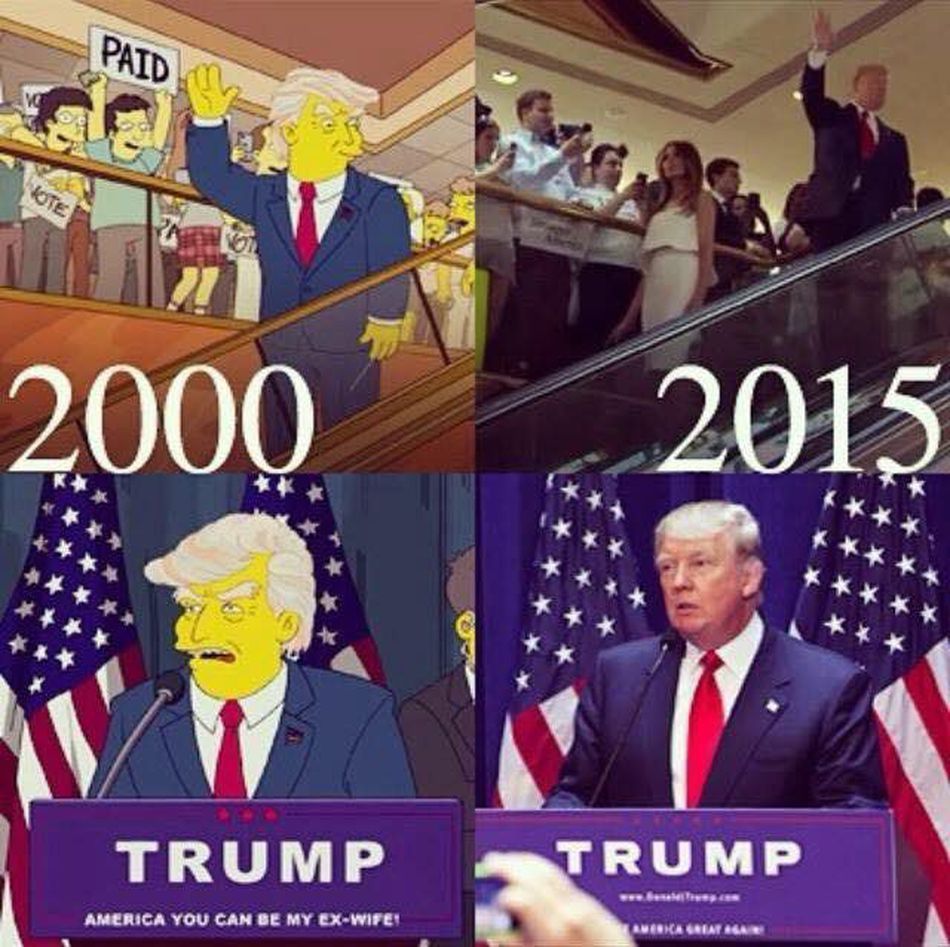 But whatever, it’s not like it’s the only cartoon to do that sort of thing.  What makes this episode good is how it goes about doing it.  The commentary on censorship that is, not on future predictions (leave that to aluminum heads like Alex Jones and Nostradaumus, who get lucky half the time).

So Marge starts a protest against the company that produces the Itchy & Scratchy Show.  The company pays her little heed at first:

“In regards to your specific comments about the show, our research indicates that one person cannot make a difference no matter how big a screwball she is.” 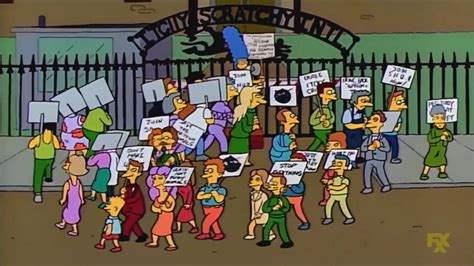 But the number of protesters get larger, eventually to the point where the company has to take notice.  So they respond in a manner that they believe the audience they cater to will appreciate.  By putting a Marge-look-alike in the show and having her get decapitated. 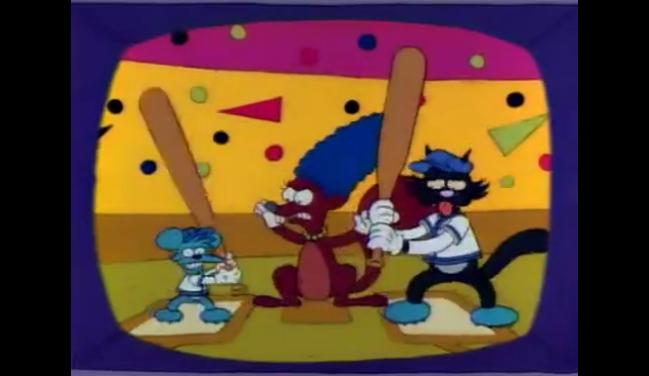 But that only makes her more determined, and the protests get worse.  So eventually, they cave-in to their demands (ie get woke).  The show goes from showing cartoon violence so unnecessarily cruel and violent that it’s hilarious:

To being something so clean and sanitized it completely alienates its intended audience.

“Gentlemen, the screwballs have spoken.”

But this is when the show demonstrates how genius it is (or at least was back in the day).  Rather than just having all the kids form a counter-protest to demand having their show back the way it was, they move on to do activities with all the other kids in town.  They go outside of their bedrooms, outside their living rooms, outside their houses, and do fun wholesome activities.

In other words, showing an upside to having your source of entertainment taken away from you.  That a society can become too hooked on electronic forms of entertainment, to the point where they become alienated from the entire community.  But if their form of entertainment comes from interacting with others in-person (email, texting, skype, podcasts, etc do not count!), then it’s an overall improvement.  And this is something all children should be encouraged to do.  And I can tell you from experience I have better memories of doing that sort of thing than staying isolated in a room with a computer monitor most of the day.  That sort of thing should be saved for when childhood ends (so like after high school, after middle school at the earliest).

That being said, and I hate to be the one providing the black pill here, this wouldn’t work quite the same way nowadays.  Back then, the number of alternative shows on television aren’t as numerous as they are today (especially when the tv shows go beyond television, and appear on the Internet, websites, streaming services, etc.).  If you didn’t like Captain Planet, you’d watch, well, The Simpsons.  If you didn’t like Captain Planet or The Simpsons, you’d watch syndications of older shows like He-Man or She-Ra (oh my God, I just now noticed that: He-She, Man-Ra), or Thundercats, or GI Joe, or Transformers, or something.  If you didn’t have the channels for those, or if it was one of those days where the good alternative programming wasn’t on, then you’d get out your game console and play some Sega or Nintendo games (unless you were one of those fancy fucks who owned a Turbografx-16).  Failing all that, then you would go outside, to the nearest arcade, and play with others in a more social environment trying to get bragging rights with high scores, and hope a topless chick from Joysticks would show up to make the day seared in your memory forever.

And that was just back then.  Nowadays everyone has a cell phone, and likely a PC of some kind, which would make the number of show alternatives virtually unlimited, meaning they could stay hooked on that stuff forever without need of social interaction.  They can just spend their days on the Internet bitching about stuff and fulfilling their narcissism and dopamine addiction.  You know, like me (but that’s only because I currently have nothing better to do except watch films shows, play games, and read stuff, while taking classes and just waiting for one of those job opportunities I applied for to merit some reward).  But at least I’ve tried to be social in the past, even during my childhood.  But it’s always been awkward, I’ve never been a conversation starter, and I’ve never been a sociable person in my life.  And it’s not for lack of trying, because I tried.  And my parents did what they could to make me sociable.  But it hurts too much for me to keep trying at this point.  Physically.  Because my mind can only work so hard on what to say and how to respond to what someone is saying in front of me before I start to get a migraine and get all stressed out and shit, let alone try to keep track of what they’re saying and act like I’m enjoying the conversation and not being bored out of my fucking mind listening to them (it’s too damn hard for me to be that cordial, and experience has taught me it’s often not worth the effort).  Which is why I’m also a partial fan of that other famous season 2 episode Bart Gets An F; a lot of relatable stuff went on in that episode (your mind droning off when trying to listen to someone, or read something). 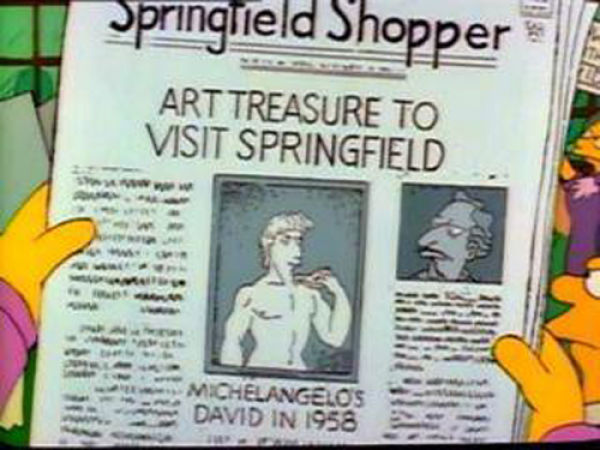 With that personal tangent out of the way, I wouldn’t have any respect for this series (let alone this episode) if didn’t address the downsides to censorship.  And, of course, it does.  Marge’s whole crusade for protecting the children from violence begins to spiral out of her control.  She was content with altering the cartoon show (which I’m sure not many were content with, as all the viewers are likely gone at this point), but others wanted more.  So others in the outrage mob, primarily women, become outraged when a nude male statue, Michelangelo’s statue of David, comes to the town.  They demand some pants get put over him, or that it gets taken out of the town.  It’s at this point Marge realizes how hypocritical it would be of her to be for censoring Itchy & Scratchy, but not also want to censor David, while being all for protecting the children from all forms of potential moral corruption.  In other words, being for censoring one form of art, but not another. 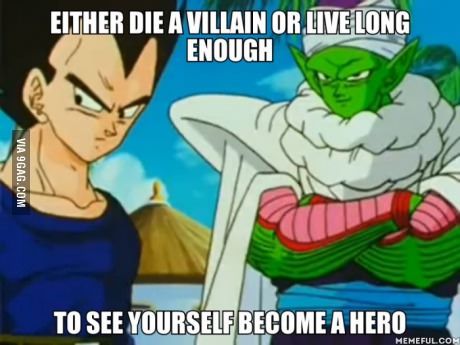 “I guess one person can make a difference.  But most of the time they shouldn’t.”

So things go back to the way they were.  Itchy & Scratchy goes back to the way it was, and the kids return to watching it, no longer interacting in the community as much as they once were.  Much like how Terry Rakolta’s boycott against Married… With Children failed, so did Marge’s boycott of Itchy & Scratchy failed.  And things carry on, with all the pros and cons (including the school forcing the kids on a field trip to see David’s dick).

But it is on to something when portraying the intended audience as going on to do other activities.  Some of which decide to protest about it, only to get called racists/trolls/bigots/fascists/nazis/etc.  Some who try to make their own platform, only to get hammered by government regulations and financial banks/services.  Sooner or later, the activities they can get away with doing will become so few and more radical to the point where there will be heavy kickback.

PS: Yeah I know, I’m petty.  A lot of people these days are.