Ok Critical Drinker. It’s time for another drunk reviewer to show how you done fucked up with your critique of this film.

First off, Rambo IV is a bit overrated. Sure, the finale is great stuff, but the story really isn’t much better than what they came up with for Rambo V. It’s just as shallow in all respects, and the ending of, “he was at peace and he came home” seemed too convenient and borderline out of character with how he was prior to that moment. With that said, I will admit that, for all it’s faults, Rambo IV is on objectively better made film than the fifth one. Personally though, I thought it was dull until the finale, so the finale shootout was all it really had going for it for me personally. Just like the fifth movie, except I enjoyed the finale in this film better as far as the kills and action went. So while I’ll concede the fourth film is the better movie, I enjoyed the fifth one more because of what I got out of it. Because I’m a man of simple tastes when it comes down to it. I just want some good kills and action scenes from films like these. The only exception is First Blood, which is the only legitimately good movie in the entire franchise (all the others are just dumb fun action at best; not that there’s anything wrong with that). 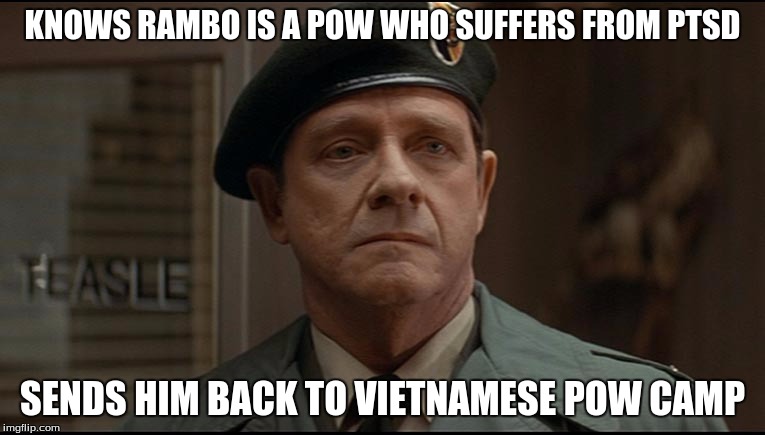 “Give him the epic poignant heroic sendoff he deserves.”
Check those expectations at the door. His character doesn’t really get those types of sendoffs, especially in the first film.

“This guy is not like the Rambo of the past films. He’s talkative, clean-cut, and easy-going.”
Well, that’s because unlike the Rambo of the past films, he had come home, and had stayed home peacefully for years. First film, he just got back from Vietnam and hadn’t settled back in yet. Second film, he just got out of prison. Third film, who really cares, it wasn’t that great. Fourth film, depressed and nihilistic in the jungle, wanting to stay isolated from society. Fifth film, he had been at a home in Texas for years, had been settled for years, and helped raise a family (not related by blood; any relevance to the title in that regard?) for those years. He had been in a different environment during all that time. Not to mention being on pills to help him cope with his shellshock (the PTSD name is for pussies; it’s “shellshock”) in ways that, if you may notice from some real-life people who are on pills like that, tend to act differently than they would when they are not on medical pills.

“And he spends his days digging a big network of tunnels underneath his ranch. Why? Because the plot needs the final battle to happen there I guess.”
That’s true. But it also resembles the underground tunnel network the Viet-Cong utilized in Vietnam. Didn’t you notice how some of the doors he used that led out of the tunnels opened up all-disguised/camouflaged-like? Like how the Vietcong would use the tunnels and open up trap doors to surprise American soldiers and south Vietnamese during the war? Rambo was a specially trained soldier that spent a good portion of his life in Vietnam taking out the Vietcong, where he would have to be comfortable navigating those tunnels. So building those tunnels gives him a sense of familiarity, and gives him something to do. Why would he need to have something to do in his peaceful existence? Well, like he said in the film, his monster side isn’t really gone; the best he can do is keep a lid on it. The pills, and constructing the tunnels, is his way of keeping a lid on it. You can take the man out of the war, but you can’t take the war out of the man. A part of him never really left, so while his shellshock does bother him, at the same time, it’s what he knows and what he’s comfortable with, as messed up as that is. He can’t truly be at peace, so he has to coexist with his past in some way. He chose to do it with the tunnel system. Plus it gives him something to do physically when he doesn’t want to get physical in other ways. True, there are likely other viable alternatives to dealing with shellshock and past trauma, but at least there’s a reason for it beyond just simple plot convenience.

“She’s getting ready to go off to college, even though she doesn’t know what she wants to do there. Well, that’s going to make for an awkward induction day. I’m pretty sure you have to pick a course before you start college.”
I’m pretty sure starting off on general education is a safe bet, with English Literature, mathematics, science. You know, bare-minimum stuff needed to graduate before deciding what type of field you want to major in. Besides, you talk as if this isn’t the norm for dumb-ass college kids these days.

“I expected more dimensional from the Dad.”
Again keep your expectations in check. Because it’s not like there are guys out there who are as selfish and irredeemable as he is. Because it’s not like her aunt and Rambo didn’t have valid criticisms of him in the first place. Besides, characters like him who are given more backstory so as to be sympathetic are a tad cliche, so it’s no problem in my opinion if we get one-dimensional assholes like him every now and again. Especially in a Rambo flick, a franchise which isn’t exactly known for having multi-dimensional baddies.

“Nice one Rambo impostor. Really showing those decades of special experience at recon, concealment, and guerrilla warfare.”
Yes, I did have this issue with the film initially. But another reviewer mentioned that he’s likely this way because of the pills he’s taking, which dull his senses and line of reasoning, and cause him to not act as he probably would while in tip-top shape. Let alone being many years rusty, let alone never doing recon in an urban environment like this one (though I am speculating a bit on that). Which is why he changes and goes back to being the Rambo we know and love when he ditches the pills and then starts killing with no fucks given.

“Why did the cartel leave him alive in the first place?”
Arrogance. And the fact that this old guy was so easy to gang up on, because he didn’t seem to pose much of a threat. And they wanted to make an example out of him and his daughter, to scare away anyone else who tries to confront them the way he did.

“He goes back and kills people with a fucking axe.”
It was a hammer.

You bitch about there not being an epic fist fight or mono-y-mono fight between Rambo and the final baddie? Like the one done in the fourth film?

“Or the Rambo impostor taking pills to help with his PTSD, but then he stops taking them, and it makes absolutely no difference to his character or abilities.”
As stated earlier, not taking the pills made him willing to start killing people, and not make dumb tactical decisions. Decisions such as how he initially confronted the sex traffickers. That’s also why he looks and acts indifferent at times too.

“How he spent years building a tunnel network […] that was wired with explosives that allowed him to collapse the entire thing anytime he wants, which totally negates the point of setting traps and killing cartel soldiers himself.”
Because he wanted them, and the main baddie, to feel desperation and fear and helplessness, just as his daughter did. The explosives came off as a measure to take in case the traps didn’t kill enough of them, or if the plan went to shit.

“Or how the cartel can’t seem to figure out it was Rambo that was responsible for their brothel getting hit.”
They did figure that out. But one of the leaders told him to let it go, to leave it alone, to ignore this and just go back to business as usual. Which granted, doesn’t make much sense, since the cartels aren’t very forgiving for stuff like that. But regardless, it’s mentioned.

“The film has him ride off into the sunset indicating he will go off and have further adventures, which goes against his character arc.”
I believe the film is open to interpretation in that regard. He could be fatally wounded and just die at the end, or he could recover. We don’t even know if he actually got onto a horse, or if that’s just a flashback. And in any case, I say his character arc comes full circle, especially in relation to the first film. A soldier whom the nation he fought for spits on him and tries to forget that past, while the soldiers who lived it cannot forget it. So as how criminal gangs of various forms commit crimes against those who will become forgotten, while their loved ones cannot forget them. It’s up to those who do remember them to keep their memories alive, while they can. Maybe even inform the world about such things so that history won’t repeat itself. And yet society hasn’t really improved in that regard since Vietnam. Because they’d like to sweep the memory of those affected by the cartel and illegals under the rug just as they would like to sweep the memory of soldiers who took part in Vietnam (and who believed in the cause) under the rug.