Source (and no there aren’t any EVAs in this movie)

I knew there was something wrong with Godzilla’s frikkin face when I first saw the trailer. And now I’ve figured it out.

He’s a fuckface, which any hardcore Godzilla fan knows. First of all, his face is fucked up, as if the above image didn’t give that away. And during the fire/laser/atomic breathe sequence, his mouth splits at the lower jaw. First I thought that was weird and different for a Godzilla movie. But then I thought, “This reminds me of something. Where have I seen something like this before?”

And to justify the fuckface comment, haven’t you ever heard that Godzilla sucks dick? Come on, don’t you watch these films in Japanese like the Angry Video Game Nerd does?


From Godzilla Against Mechagodzilla (2002 Millennium Series)

Anyway, enough of the immature lines, how is this movie? It’s, uh, interesting. It’s one of the most radically different takes on Godzilla yet, more-so than the recent Gareth Edwards version which took things from a more limited point of view manner. Even more-so than the Godzilla: Giant Monsters All Out Attack which portrayed Godzilla as a reincarnation of a bunch of dead guys who died at sea during WWII. This time around, he’s still a monster that feeds off of radioactivity to grow and mutate into a monster, except there’s more emphasis on the mutation aspect. He doesn’t start out as Godzilla, he starts out as some weird poorly made CG lifeform that crawls around and breaks shit. Then he mutates into something that more closely resembles the figure we’re all familiar with, but with a zombie face (no, I’m not letting that fucked up face go! It’s frigging weird!). And he runs amok around Japan for reasons that don’t seem clear. I mean, there’s implications he was going for the nuclear reactors (as he’s done in some past movies, like Godzilla 1984), but we never see him get there to see what he does, nor are we left with theories as to what would happen if he ever reached the reactors. In fact, it’s downplayed significantly, even though that downplays his nature/motivation as a result. I mean, the original Godzilla movie didn’t give him a reason for coming ashore and tearing apart Japan, but that was when monster films were in their infancy and didn’t need much motivation if any, so I’ll let that slide. Like the change in perspective with the Gareth Edwards Godzilla film putting the emphasis on focusing on the monster(s) from the perspective of humans on the ground, this film makes the perspective from the politician’s point of view. And you know what? It actually works for the most part. It’s refreshing to see politicians first react to a steam eruption in the bay, consider the costs, civilian casualties, press conferences, public image, etc., and then see how it evolves when the threat becomes greater and greater, with the monster making itself known, then causing damage, and then growing into an international issue. All the while it pushes the theme of Japan making decisions on its own, independent of international pressure from other countries and the UN. Balancing its image and stance with other countries, cooperation vs. lack thereof. Scientists working behind the scenes trying desperately to find a way to deal with Godzilla while working with other scientists from other nations, while politicians have to work through red tape and other barriers that are set forth from national and international policies, their relationship with China, Russia, Germany, and the U.S. China and Russia are pretty much given a negative light, Germany is shown to have smart computer scientists, and the U.S. is a double edged sword, has ways to help, but also ways to impede progress, with pros and cons. The relationship between Japan and U.S. is shown to be complicated, but ultimately they want to make it work (by “they” I mean both the U.S. and Japan, both sides want to make it work).

While that’s a nice fresh take to give to Godzilla films, it comes at the cost of investing characters, characters who are the protagonists of the film, who have motivations, and that the audience can relate to. Don’t get me wrong, there are central characters, but efforts to make them relatable are sacrificed for the political/science portion. What’s the word I’m looking for? Oh right, systematic. It’s much more systematic in its progression than it is personal. Focused on the political system rather than the characters.

Other issues I have with it pertain to Godzilla himself. I mean, I know there’s only so many times they can reboot him and make it seem fresh while keeping him generally the same, but I think they went too far here. I mean, the weird mutation, the split jaw, the weird thing with the tail at the end. Honestly, it doesn’t seem necessary to go in that direction considering the fresh perspective they take this from. I mean, since it’s a reboot, I guess they plan on going in an interesting direction with it in potential sequels, but I’d rather have director Hideaki Anno get off his high horse and finish the fucking Evangelion Rebuild. You have just 1 movie, 1 fucking movie left to make, and you’re delaying a satisfying ending that everyone is looking forward to that weren’t happy with End of Evangelion! On the other hand, he may just leave us trolled and disappointed like last time. Whatever, I refuse to watch part 3 until part 4 is made and released!

You just know Hideaki Anno is dying to do this, probably with Jet Jaguar or Mechagodzilla

Plus, am I the only one who thinks his tail is too long? Well, maybe not too long, but I consider it unrealistic for the tail to just go over buildings like this as opposed to just dragging on the ground. Yes, this is where I draw the line on science, physics, and realism for a movie about a giant mutating atomic lizard immune to bullets and missile and breathes laser beams that can destroy an entire city within seconds. All that I can take, but the tail is bullshit. 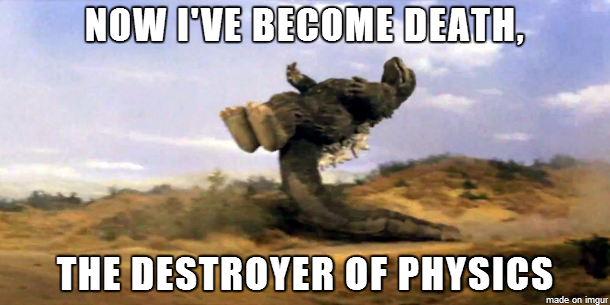 Anyway, it is nice to see them blasting Godzilla with a bunch of bullets and missiles, and seeing all of them hit, as opposed to explosions and particles that just fly everywhere and only hit Godzilla 40% of the time (possible exaggeration, depending on which Godzilla movie you compare this to). Plus it has a really awesomely epic moment of atomic breathe.

So, some pros, some cons. CGI is good in some scenes, bad in others. The climax is appropriate, but a bit anticlimactic (this is a solo Godzilla film, no other monsters to go against). There’s enough there to recommend this movie, just know what you’re in for. I have worries about where they plan on taking the franchise from here though. 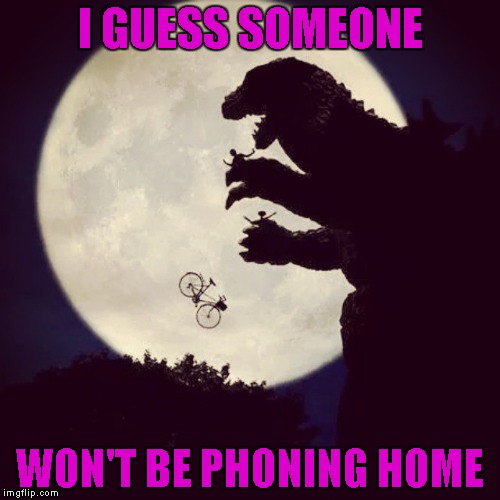