I’m starting to think film critics are seeing the recent competence in horror films like The Witch and Lights Out, and are beginning to confuse it with simple competence. Neither one of those films were bad, mind you, I just didn’t think these movies were going to lead us to the Promised Land. — Chris Jaramillo of After Lobby

Well, it wasn’t terrible. This film has been getting a lot of hype about how awesome it is, but I think it just has to do with the fact that it’s one of the few horror films out there that doesn’t suck. That doesn’t mean it’s great like The Exorcist, or Rosemary’s Baby, or Halloween. It’s just, well, decent, at least in my opinion.

So in case you need to know the plot, three Detroit house burglars show up at a blind ex-Gulf War veteran’s house to steal a bunch of money he got from a settlement involving some rich girl running over his daughter.

So, theme, lessons, morals, etc. From what I gathered, it’s all about doing whatever it takes to put yourself into a better position than the hellhole you’re currently living in. All the characters are in a situation that would improve if they had some cash. The female protagonist Rocky wants money so she can move out of Detroit away from her bitch mother, and go to California; she also wants to take her younger sister with her. That’s pretty much the best sympathetic background story you’re going to get from this film, aside from the blind guy who lost his daughter, and wants to make his situation better by getting a new daughter. I was thinking there was going to be some compare and contrast elements between the two, but I don’t think that’s what the movie is going for.

I was thinking the theme would be along the lines of doing whatever it takes to improve your situation. For a town like Detroit, I have a pretty good idea. Anyway, what hurts this theme is the decision to make the blind man less sympathetic. By making him into a villain. So that way you would forget how terrible of a person Rocky is by putting someone else in there who is an even more terrible person. I mean, as far as asshooles/bitches go, she’s not that bad. She lives with a shitty family (younger retard sister aside) in a shitty house and has dreams of paradise. By robbing other people’s houses and making their lives as miserable as hers. The lengths one is willing to go to to achieve their dreams.

Oh, and the other two burglars who are with her? Who gives a shit? They aren’t given hardly any backstory, we don’t know their dreams or aspirations. Hell, the villain is more developed than those other two. They just make him a bit insane, even though there was better potential for a character like this. Just making him blind due to his experience with war, and emotionally devastated because his daughter was killed, that should be enough to make him someone angry at the world and angry at burglars. It would allow for some interesting discussions on the theme of willing to destroy someone’s life, in this case a life that is already destroyed, for the sake of improving yours.

But that’s not what we get. Instead, we have assholes trying to steal from an even bigger asshole. Never mind that greed is bad, it becomes ok if you’re really desperate for money and you’re stealing it from a bad man, never mind your own faults. Less critical thinking involved that way. And the ending isn’t very satisfying, considering that despite how much of an insane bad guy the blind dude is, I couldn’t really ever grow sympathetic for her plight. Throwing a retarded pre-teenage sister into the mix for sympathy is a cheap ploy that didn’t work on me for this one. Plus there’s some plot holes, such as how she got away at the end when there is a killer dog in the car! Personally, I think it should’ve ended with her killing the blind guy and then her getting arrested and charged with murder and home invasion. Although I guess the knowledge that the old guy lives is enough to not make her fully enjoy her dream paradise in the end, but that’s still not that good of an ending. 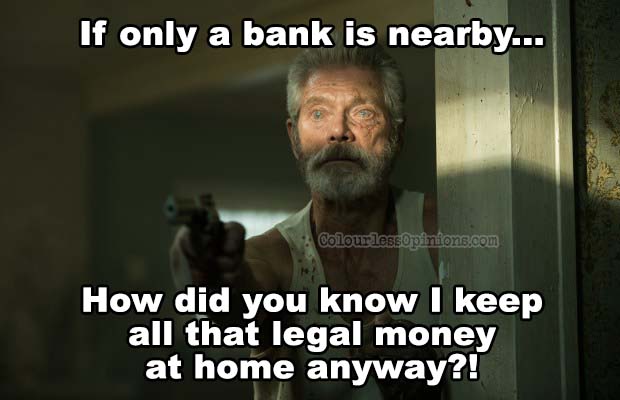 That being said, there’s some great thrills and tense scenes in this, and not very many cheap jump scares. It drags after the girl is captured, because her rescue seems kinda pointless. It pads out the film time at that point, and doesn’t really change anything, considering that other guy should’ve been dead at that point, and he ended up dead anyway. But regardless, it’s worth a watch. But in regards to a superior horror film made this year, I’d go for the VVitch instead, unless you want a tense slasher rather than a horror film.

Other recommended review of this movie: by After Lobby