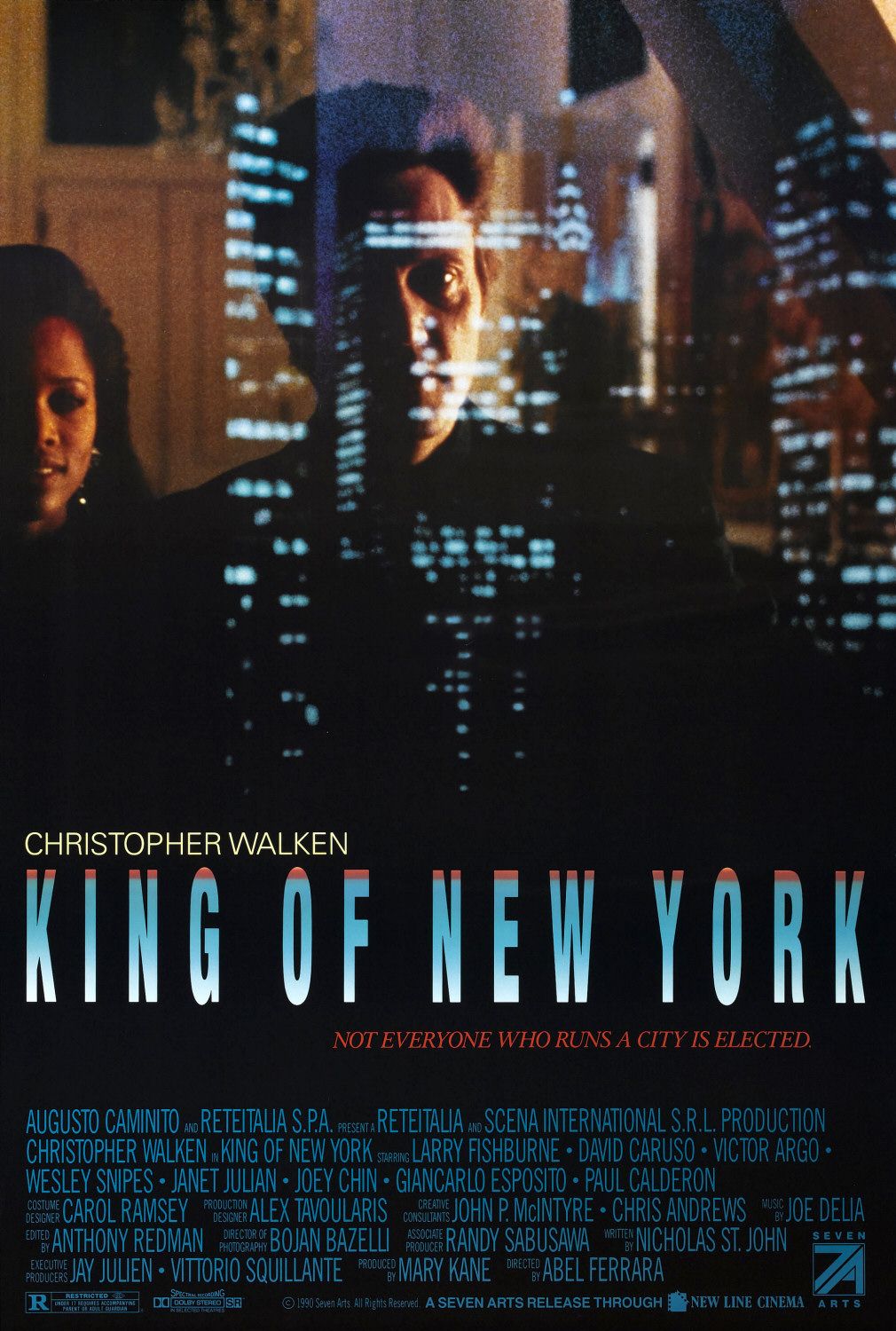 It was worth watching just to see Christopher Walken blow away David Caruso. Someone needs to make a meme out of that whenever he looks out the window of a car.

With that out of the way…

The opening moments are very solid. Just the presence Walken gives, that his is a man with a lot going on within him, yet strong-willed enough to keep himself composed. He has gained and earned the respect of those close to him, including these two hot chicks who would probably sleep with him any time he asked, yet they also wouldn’t have a problem finding someone else for him to sleep with; let alone the fact that they would actually put their lives on the line for him. Why? Because he is a badass, a gentlemen when he needs to be, ruthless when he feels it’s necessary, actually has good intentions with his plans for the city, and cares about the people who follow him.

But he’s also a man who has lived a criminal life for too long to live anyway else. On the other hand, he also lived that life long enough to see how fucked up both that way of life is, and how fucked up the straight path is. He has witnessed corruption in both the criminal world, the civilian world, the law enforcement world, the political world, and with the justice system trying to keep things together. He’s lived in the world, and in prison, long enough to know which things are pipe dreams and which are more realistically achievable.

Which is why I think this film had a huge pair of balls on it at the time of its release, when the war on drugs was in full swing. Walken’s character simply looks at the drug trade as a necessary evil when it comes to business and coming out on top, nothing more. Just as he sees the hiring of thugs off the street to be a necessary evil, which also has its upsides to it. Sure, these are the same type of people who would sniff/shoot the same drugs they would sell on the street, somewhat victims of society and the system (though going outside the box, I believe that to be a lesser extent compared to the other reasons), made bad choices in life setting them on the gangster path. But hiring them gives them opportunities, is more cost effective than hiring bodyguards, and involves them in a (somewhat) constructive business. And Walken’s business us utilizing the criminal world for some good, such as using drug money to keep a hospital from shutting down, a hospital that helps children stay alive. Granted, this could be a two-edged sword, with these same children later growing up into the same type of gangsters, thugs, straight or crooked cops/politicians, etc, all thanks to this drug business. But its making the best out of a bad situation that could be worse.

I was worried for a bit, with how some of these cops decided to relentlessly pursue Walken, both in and outside the boundaries of the law. Worried that this film would go with the theme of, “Becoming the very monster you’re fighting.” Thankfully, the film is as smart as I was hoping it would be. Near the finale, Walken confronts the leader of the force that had been after him, and tells him what’s what.

“When the D.A’s office investigated the sudden death of Arty Clay, they found that he left a $13 million estate. How do you explain that? There there’s Larry Wong, who owned half of Chinatown when he passed away. Larry used to rent his tenements to Asian refuges, his own people, for $800 a month to share a single toilet on the same floor. How ’bout King Tito? He had thirteen-year-old girls hooking for him on the street. Those guys are dead because I don’t want to make money that way. Emil Zappa, the Mata brothers, they’re dead because they were running this city into the ground.”

“You think ambushing me in some nightclub’s gonna stop what makes people take drugs? This country spends $100 billion a year on getting high, and it’s not because of me. All that time I was wasting in jail, it just got worse. I’m not your problem. I’m just a businessman.”

“You expected to get away with killing all these people?”

“I spent half my life in prison. I never got away with anything, and I never killed anybody that didn’t deserve it.”

“Who made you judge and jury?”

That all being said, this film isn’t perfect. It’s a bit rough around the edges at times. I thought Walken’s character could’ve shown a little more depth (via the script). And there’s some characters we’re left wondering what happened with, plus some dangling plot threads (Janet Julian’s character; the lawyer being asked to try and reign Walken in, though that scene is the last we ever see of him). It’s still a solid watch.

PS: Yeah, I’m not a Caruso fan. His face irritates me, and he’s the main guy I think of when someone says, “Orange man bad.”

PPPS: Is this the definitive Christopher Walken movie?